What happens when the government believes its own propaganda?

This is Joseph.
Tax cuts cause dynamic growth is a common talking point that fails most of the tests of being a clear and universal principle. There are high tax nations (Germany, 48%) that have strong and robust economies (US$ 45.7K per capita). There are low tax nations that struggle (Greece, 35%) with US $17.6K GDP per capita.
This is especially true with the idea that it is tax cuts on the wealthy that drive growth. The United States had it's highest income taxes on high earners in the 1950's -- hardly a period of sustained slow growth. Now this is not to say that taxes have no effect, but that it is a complex relationship with feedback that is not really subject to simplistic analysis. But there are simple examples which should make you question the unthinking conclusions of "taxes always lower growth" but it is also the case that the contrary isn't true. It is my suspicion that it is all about how the taxes are spent and the efficiency of government that is driving these factors.
As we mentioned a few days ago, the UK did a serious of massive tax cuts. The consequence appeared to be the markets thinking that the government had lost its mind and a sudden massive increase in borrowing costs, requiring the central bank to intervene. Pension schemes faced serious risks of insolvency as they suddenly watched the value of their bond holdings plummet. Home sales are collapsing as banks pull back mortgages that are suddenly unprofitable. One internet pundit annotated the following chart to show just how destructive this is: 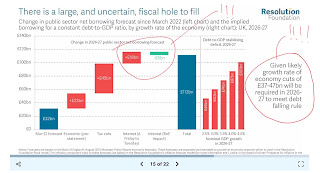 Even after a GBP 65 billion intervention, borrowing costs increases alone are as large as the budget for housing. The net deficit is >10% of the 2022 budget and exceeds education, and is about 2/3 of health care costs. It's just crazy.
Now just listen to the Prime Minister's radio tour to try and defend these policies. It is true that there are some external shocks, mostly due to the war in Ukraine, but the tax cuts are an unforced error that has increased interest rates and dropped the value of the Great British Pound. Nor does it help when the Prime Minister won't answer a question on whether people's pensions are safe and tries to shift responsibility to the Bank of England. That isn't going to increase economic uncertainty at all, is it?
I suspect that this type of action is the result of "noble lies" told to benefit the well off being repeated so often that the people in charge no longer realize that they were lies and have begun to believe the propaganda and I fear that rarely ends well.
Posted by Joseph at 10:19 AM