This is Joseph
This tweet needed to be seen to be believed: 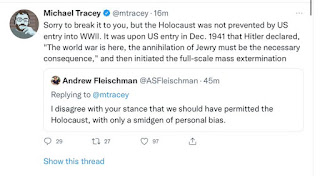 I find that World War 2 is a fertile ground for this theory that everything bad comes from the United States. When I was younger there was a huge debate about whether the US knew about the Japanese attack on Pearl Harbor in advance and that this somehow reduced Japanese culpability. Now, pre-knowledge of the attack might have had implications for the leadership being indifferent to casualties instead of setting an ambush, but it is common for intelligence to go astray. Look at the Nazi invasion of the Soviet Union:

Stalin also ignored his own spies, who, from such locations as Germany, Japan, Romania and Switzerland, reported with increasing frequency that the Nazis were about to strike. In early 1941, for example, an undercover source in Berlin asserted that “war with Russia has definitely been decided on for this year,” whereas in Bucharest a German commander was quoted describing the upcoming clash as “something that goes without saying.” Border guards heard much the same from captured enemy saboteurs, and railroad workers observed huge numbers of Nazi soldiers moving east. Though not every report proved reliable, Soviet intelligence purportedly named the exact, or almost exact, date of the invasion no fewer than 47 times in the 10 days before “Operation Barbarossa” went into effect.

Now, to be clear, Japan attacked the United States and then Germany declared war on the United States. It is implausible in the extreme that this process was driven by the United States in any meaningful sense of the term and Nazi anti-Jewish propaganda goes back to far earlier eras, like the book Mein Kampf.

Now World War 2 was atypical in that there was a pretty clear event that started the war and the other side uniformly declared war on the United States. Further, it was pretty clear that the Axis countries were conducting atrocities on defenseless conquered populations. It is rare that the lines are so clear as with the US involvement. I think this is uniformly true of the Allies, in general, but I think it is clearest with the US which was not central to the pre-war diplomacy as the UK, USSR, or France.

This strange brand of anti-Americanism continues to the modern era, with people still needing to debunk that the defensive NATO alliance was the cause of the 2022 war. To be clear, some US interventions are questionable -- I think serious people can ask hard questions about the wisdom of the Vietnam war or the invasion of Iraq. There are many US foreign policy decisions that are questionable.

But saying the US is always a bad actor is as naïve and silly as calling the US as always being a good actor. Nation-states are famous for making all sorts of unfortunate decisions in the name of national interest and the US is no exception. But it is ridiculous to try and make the record worse than it actually is. To be honest, on a historical scale, the US has tended to be an atypically ethical and restrained great power.

Reflexive anti-Americanism is very  unhelpful in generating a useful pathway to improving US foreign policy and these sorts of silly arguments drag oxygen away from actually working to make the US more ethical and more restrained as a great power.