This is definitely an interesting take

This is Joseph.
Parody, has gone here to die: 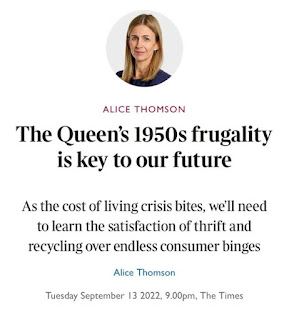 Paywalled but you can read it here:

When the yacht was commissioned in the 1950s, Her Majesty turned down the initial design as too lavish. She wanted simplicity and would disembark for picnics with the Tupperware on remote beaches in the Western Isles.

Her dresser, Angela Kelly, explained that once an outfit had become familiar to the public, the Queen would recycle it to wear at Sandringham fêtes.

Her shoes and handbags dated back to the 1950s. She didn’t mind anyone seeing the £30 electric heaters in the Audience Room at Windsor or knowing of her preference for shallow baths — seven inches at 22C, adopted by her father George VI at Buckingham Palace during the war.

So you have a person who has a yacht, even a modest one, an audience room, and a dresser. It might be that she is projecting a helpful attitude but actual poor people lack the luxury of these things. Actual poor people don't have pets to spoil or Land Rovers as vehicles:

The Queen didn’t have to fake her naturally parsimonious nature. She championed the Land Rover for its durability and the fact that she could mend the engine herself. Not for her, her grandchildren’s new Range Rover SUVs. Only the corgis were spoilt: the story of Prince Andrew being made to retrace his steps after returning from a long walk as a child without their leads, while the dogs remained to eat slivers of freshly cooked rabbit, became a family legend.

It is very different to be frugal by choice, when you have money. Just like it is easy to decide to diet as opposed to lacking enough food. This family is in a very different economic position than the Queen in terms of cost of living. It is one thing to have a style driven by frugality, it is quite another to be forced into it by circumstance, especially when actual deprivation is a policy.

It is like people who worry about climate change so they open windows instead of using AC but drive SUVs, fly to climate conferences, and think nothing of a large house. In the end, the Queen simply did not live in the same environment as any but the most affluent of her subjects.