This is Joseph.
Just the public part of this Substack post by Ilya Shapiro is amazing. Like how disconnected do you need to be from academic hiring to make this complaint:

The idea that the diversity piece might have been what sank his application ignores his CV. Honorary fellow at the University of Mississippi and adjunct teacher at George Washington University Law School from 2005 to 2007. Now he has published books ad done a lot of think tank work so it might not be silly to have had his name in the pool. But he was approached by a faculty member on on the search committee and had limited academic experience. That lack of institutional academic experience was far more likely than the diversity statement of the competing candidates to have been decisive.
That said, that he was never given a rejection letter is just rude. Sadly, not sending rejection letters is common in academia but also clearly something that we should do a lot better about.
That said, we are not talking about a person who has been driven into destitution by these decisions. For example, the Georgetown position he declined ended up getting him a national speaking tour about free speech, so I'd say he ended up doing ok. Even if it is a bit too easy to point out the contradiction between "I have been silenced" and "I am on a national speaking tour": 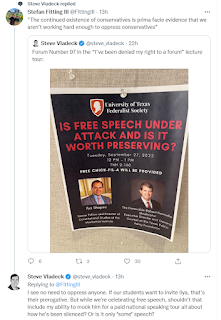 I mean it is fine for Ilya to complain about how things have worked out for him professionally. I think all of us have had our professional disappointments and we have all had job that ended up not being good fits for us that we had wanted in the abstract (before the bad stuff became clear). But I also think that we need to be clear that he ended up with a prominent and important job that is probably more desirable than law school Dean. Or, if not, it is hardly a major step down from it.
And that brings me to my final thought here. There is an odd reaction in modern right-wing circles to being able to "dish it out but not take it". See Radley Balko (hardly a left-wing flower): 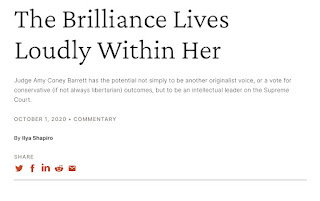 Now it is perfectly fine to have emotion-based opinions on different nominees for the supreme court; it is an important institution and strong feelings over life-time appointments are sensible. But freedom to speak does not mean freedom from criticism and a person with strong and polarizing opinions shouldn't be surprised when they elicit strong reactions from others.
So, to summarize, the failure to be hired on one's first try as a law school Dean is not an exceptional or unexpected outcome. I have failed many, many job searches in my academic life and that is as a person focused on that pathway. Dozens and dozens of hours have led to form letters and or silence from a prospective employer, even when there were people at the institution would would have liked to hire me. We can be glad that Ilya Shapiro ended up with a job he appears to enjoy and that lets him continue to advance his views, even if I find them quite disagreeable myself. But in no way does this make him a martyr to the culture wars. Instead, it is just the sad state of academic hiring.
Just look at people like Ashley Ruba who do a ton of outreach on AltAc (alternative to academia) jobs for highly educated professionals and you can see many stories of people with impressive skills choosing to do an non-academic career, just because academia is a challenging place to have a career right now. Rather than the story of an exceptional, it is just a normal tale of people finding alternative careers outside of the academy.
Posted by Joseph at 8:30 AM