There is a idea in economics that giving money to the wealthy will result in faster rates of economic growth than giving money to the poor and middle class. To be fair, it is not completely daft to ask whether there is a specific way that taxes could be adjusted to simultaneously increase revenue and economic growth. While that seems ambitious for even a good policy, it is to be remembered that a bad policy might manage to hurt both revenue and growth at once.

You can easily see cases where targeting benefits at the wealthy might not work so well. The idle rich are unlikely to be active investors creating new capital. The rich have the options to invest elsewhere and might use their increased revenues to drive economic growth in other places. The recent British tax cuts seem to have created a lack of confidence, for example: 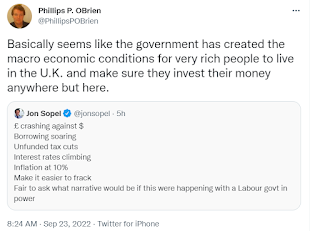 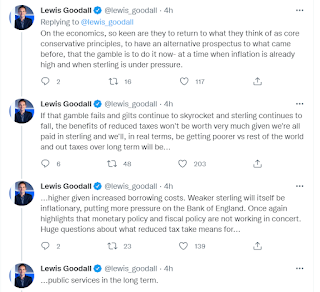 Massive tax cuts when there is a problem with inflation suggests that there are about to be some exciting moves in interest rates. Which, going back to the first tweet, is a great opportunity to shift into investing overseas where growth will be a lot easier than the place that is trashing its economy.
In general, I have always wondered about the wisdom of investing in the wealthy. It's been a common historical strategy and it seems to weaken states and not strengthen them. In particular, concentrating power in a small group seems to have the unpleasant effect of making it easier for them to co-opt the normal machinery of the state. We do not see an aristocracy or a strong elite class as a sign of freedom, and that includes elites like the Roman Senate that outsiders could (at least in theory) join.
As a more general critique, there has been an increasingly odd movement to believe in the opposite of what the data shows. Brexit seemed to posit that putting trade restrictions in place would increase prosperity. Giving more money to the rich is the opposite of helping the poor. Even in housing you have this odd belief that restrictions on development are not behind higher prices. I get that these are complicated systems and that there can be some odd outcomes and incomplete explanations, but in the normal course of life one would assume that the direct effect would be the most likely to dominate.
Similarly, taxes have a distributional impact. Selectively cutting taxes on the wealthy in the midst of a cost of living crisis is not going to have immediate and helpful effects on poverty. The UK has around 10% inflation and is about to have an energy price crisis -- this is a fairly heroic view of how fast one expects the economic growth to happen to help out the working poor.
PostScript: This story in the Guardian reported here with this excerpt: 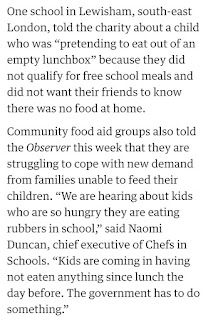 Really puts the cost of living crisis in perspective. Remember, the idea here is that the government will give massive tax relief to those with high incomes.  Look at the list of cuts:
Some of these will help the parents of starving children but there are big cuts focused on those making large incomes (people making $165,000 per year are not short of money for basic foodstuff).