This is Joseph.
Perhaps it was a mistake to post on a fast-changing event but the FTX saga definitely has taken some rather unexpected twists: 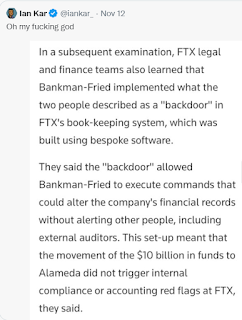 So it really is looking like this company was a straight up Ponzi scheme. Which probably shouldn't be a surprise given the interview with Sam Bankman-Fried where Matt Levine characterized his business model as:

I think of myself as like a fairly cynical person. And that was so much more cynical than how I would've described farming. You're just like, well, I'm in the Ponzi business and it's pretty good.

So perhaps there we warning signs about cryptocurrency as an investment? Insofar as a currency is a financial instrument, there is rarely a more dangerous market than currency speculation. Insofar as it is an investment, the fundamental value of zero really needs to be engaged more. I am hoping Mark comes back to this as cryptocurrency is really his wheelhouse and he has been proven right.
What I found more fascinating is how an educated person could have ended up describing (and agreeing they were describing) a Ponzi scheme as their business model. Then I read this: 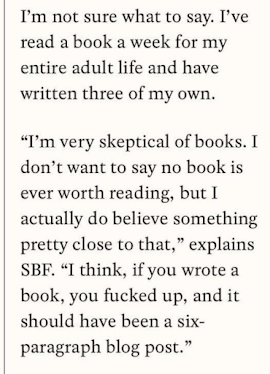 Then it made sense. If the world is about six-paragraph blog posts (not that I, clearly, object to the medium) then it is hard to get depth on any subject. When you are running a financial services company based on a physics undergraduate education, it is easy to become arrogant.
Speaking of arrogant, Twitter laid off too many employees and now needs to rehire some because they are suddenly short of critical skills. One point is that this is not a promising sign of a solid business plan. But there is a second point about how it is revealing about other cultural cracks. A twitter manager posted this on his internal slack: 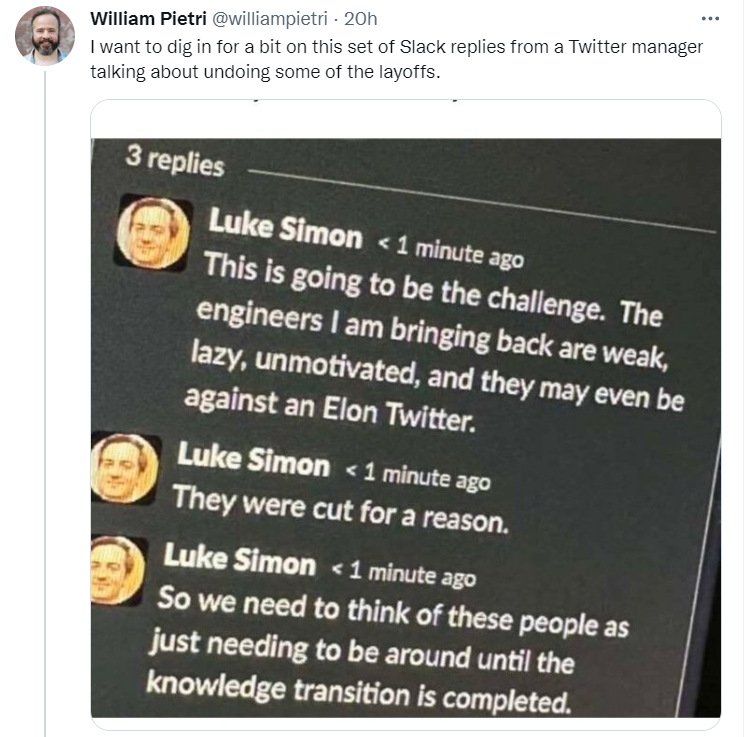 William Pietri is right about the immediate diagnosis:

But I think that there is another level to all of this change. Part of what made the "tech industry" so appealing was a knowledge based approach that was intended to change the world. Now money was a big part too, people need to feed themselves. But there are lots of ways to make money. One thing that tech really had going for it was the ability to intrinsically motivate people, via humane treatment and a sense of mission (Tesla saves the environment, crypto is a new future free of government meddling, Uber will rethink transportation). But now that the big items are looking hollow, how is this work environment any better than a blue collar labor one? This is precisely the sort of managerial arrogance that poisoned industry in the past. It is a shame to see it emerging in tech, as well.
In any case, these may prove to be rather extreme cases, especially Twitter as it was acquired with a leveraged buy-out and many viable companies cannot survive a massive debt load. But it is a warning sign for ungrounded optimism and we need to remember that fast-growth can cover a multitude of sins (think of railways-- a clearly historically important business but there was definitely a lot of shaking out).
How this all ends remains to be seen.
Posted by Joseph at 10:24 AM