This is Joseph.
This amazing tweet has been commented on by both Dmitry Grozoubinski and Eschaton. Here is the tweet, which, to be honest is worse than the article (written by different people to be fair-- Arias and Granoff -- who are generally interested in fewer nuclear weapons): 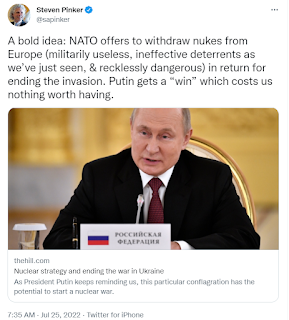 The article suggests removing the last 150 American nuclear weapons from Europe. Steven Pinker appears to be expanding that to all of NATO. One option is pointless symbolism. The other is really daft.
France has 280 deployed warheads and the UK has 120 deployed warheads. Removing 150 warheads is not a small change but is hardly an end to the NATO nuclear force. The United states still has 14 submarines that deploy weapons, with 20 weapons per submarine. Like if this caused a very robust settlement with the Ukraine maybe the symbolism would be worth it, but isn't the actual negotiations supposed to be between belligerents? How well has it worked historically to have a different alliance negotiate on behalf of one side of a conflict? Note that Ukraine has nuclear weapons and decided to get rid of them and may have opinions on the wisdom of this decision.
Now, getting rid of all of the NATO nukes WITHOUT getting rid of the Russian weapons would mean the only nuclear power in Europe was Russia. It's also a bit unclear how you introduce this idea to France. You know, the country with the famously rocky relationship with NATO. Does England count as Europe for this metric, because I can see this debate a mile off. Nor is it clear how NATO can negotiate on behalf of the Ukraine. Or what the terms of "ending the war" are. Does Russia leave the 20% of the country it currently occupies? What about Crimea? What about post-war guarantees as to no future invasions with a military reformed based on the lessons from this war?
But the idea in the article (unilateral removal of US weapons) is at least possible. It requires on decision maker (the US) and might (or might not) have some positive benefits in having fewer weapons around. But, to be frank, any lasting peace needs to involve Ukraine and Russia as the core parties and it might make a lot of sense to ask what they want. Obviously, they are currently too far apart for a peace talk but here is where the real seeds of a lasting peace might lie. Perhaps we might wait for one or the other party to actually make this suggestion before we just start proposing things as third parties?
Posted by Joseph at 8:00 AM