As previously mentioned, Ohio is a pro-choice state/


Ohio girl, 10, travels to Indiana to get an abortion because Ohio bans abortion at 6 weeks and she’s 6 weeks & 3 days pregnant. https://t.co/qtw8FEzIVA


What I like about this clip is to watch it on mute - because that moment when the anger overtakes her at the failure of journalists to raise abortion as a presidential debate issue…I feel @HillaryClinton on this one.

“Not one question” on abortion in 8 debates. I remember. https://t.co/Xr3TqCZWwo

I've felt for a long time that commenters and possibly political scientists have underestimated the role that resentment and the need for attention ("I owned the libs") plays in the 21st Century right.

The most unethical justice in history https://t.co/BBh2ERlGVa

You can't judge a movement by its most extreme manifestations, but the consistency with which iIsee conservatives express their vision of winning in terms of liberal pain reveals something.


Looks like someone may have picked the wrong time to try to buy the LA mayor's office.


This clown gave Mitch McConnell and the GOP over $1,000,000 and wants people to believe this? https://t.co/MYrKdfjzCH

I can think of at least three Republicans running for congress who have made pro-Nazi comments.

On Jan 5, two days after being sworn in, and right before the insurrection, GOP Rep Mary Miller said she was recruited by the founder of TPUSA.

Then she praised the Hitler Youth program:

“Hitler was right on one thing. He said whoever has the youth, has the future.” https://t.co/msibaFOPr5


To quote a friend of mine, “ We fight the battle in front of us with the cards we have. That battle is an election in five months. Everything else is noise.”


Anyone who says (in any form) that your vote doesn't matter is engaging in voter suppression.

It may come from ignorance instead of evil, but it's still voter suppression.


I will do one more post before I start blocking people.

The Democrats need to win the next few elections or we will sink so deeply into a Christian-fascist state that it may take decades to get out of it.

Not all of computing is about web-centric systems at scale. https://t.co/K9Tmsrpqfj


Are the canaries screaming, Peggy? https://t.co/5s2mettXSB

In a functional democracy, the Texas GOP would pay a much greater cost for the power grid than the Democrats would for inflation.


Power is out for 4th time this week in Leander neighborhoods. @GregAbbott_TX and his guaranteed electric grid have failed again. 3 hours till our AC is up again.


Do they blame Biden for the price of gas in Belgium, too? pic.twitter.com/wQL042EfV0

Marge Greene tonight says that Putin just wanted to be our friend and ally, but we blew the opportunity by supporting Ukraine. pic.twitter.com/ZU9sKBRu48

Yet again, Marjorie Taylor Greene's comments are being used by Kremlin propagandists on Russian state TV. State TV host and State Duma member Evgeny Popov is interpreting her statements to mean that she wants Americans to help Putin win in Ukraine. pic.twitter.com/nYLntOYdtb


Meanwhile on Russian state TV: State Duma member Evgeny Popov, who is also the host of the state TV show 60 Minutes, says that Scotland, seeking to hold a referendum on Scottish independence, "should reach out to Russian hackers for help —after all, they helped to elect Trump." pic.twitter.com/3bhV220qlH


Russia is betting that Republicans take over in 2023. They know that Trump ⁦@mattgaetz⁩ ⁦@RepMTG⁩ will cut of funds to Ukraine. Leaving it defenseless. pic.twitter.com/tzHENKY25k 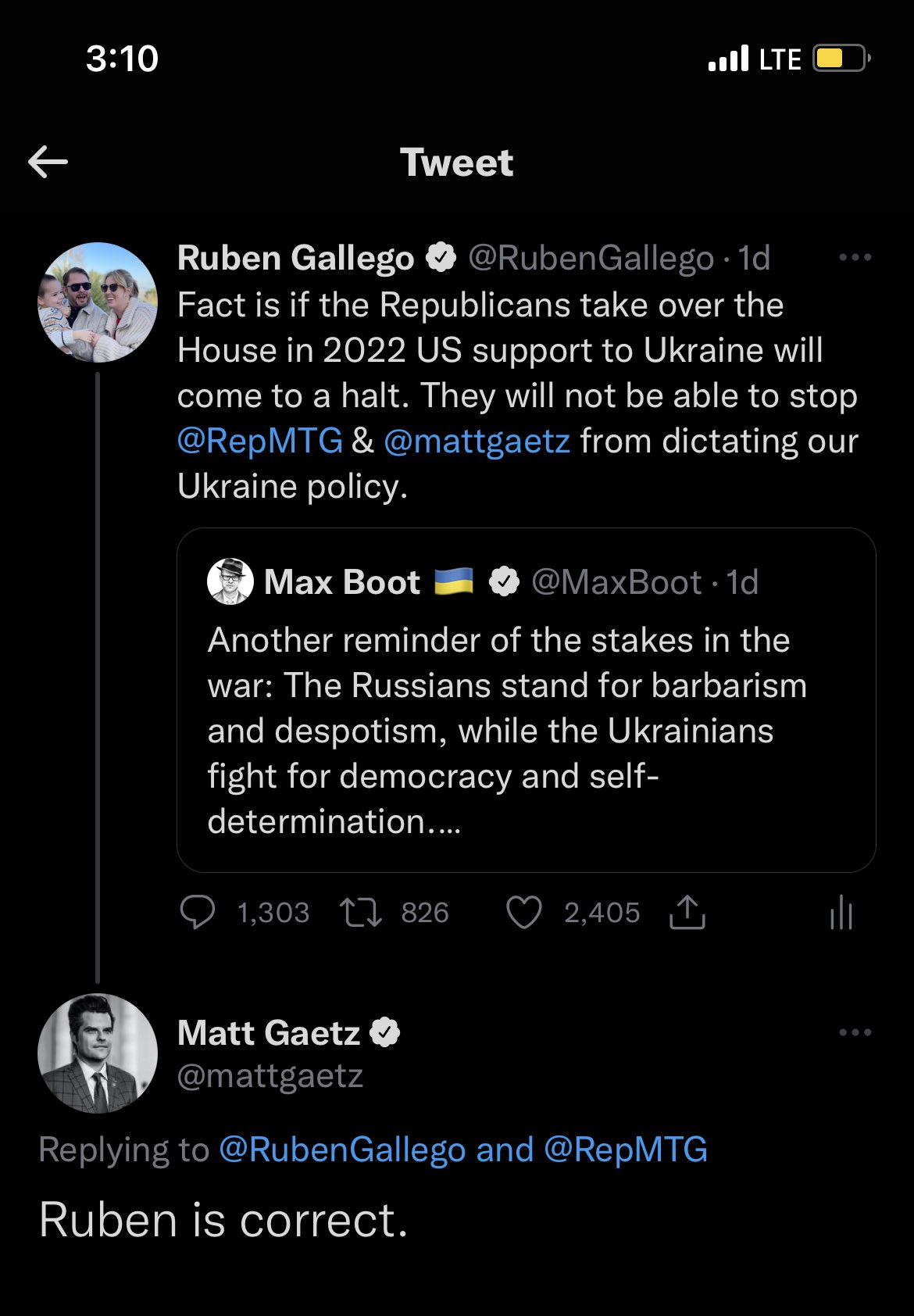 
there is a whole thread & it is very good https://t.co/lFPeLMvJGb


An embrace of this independent state legislatures theory would be the equivalent of a coup to steal elections from the rightful winners. Allowing outrageous partisan and racial gerrymandering for state legislatures is part of the plan. https://t.co/6FdhVVnp3Z

I hate to bring everyone down by talking about actual, substantial solutions.


I know it's not a sexy topic, but this seems like a good time to talk about gray water. https://t.co/dGcUm91qh4

Radio Shack? Is this part of some Stranger Things 80s PR campaign?


These zombie companies turned crypto schemes are getting weird.https://t.co/CPNHkRZ92e


"About 21% of crypto-investors said they’ve used a loan to pay for their cryptocurrency investments. Personal loans were most popular, but payday loans, title loans, mortgage refinances, home equity loans and leftover student loan funds also have been utilized." – DebtHammer


The weird distortions this stuff is having on the venture market can't be overstated. How many legit companies will never get built because they don't sell a token is profoundly embarrassing.

If I were running the DNC, I'd be flogging the hell out of this.


I have nothing to add.


Donald Trump, The Great Unifier, putting his ego aside for the people. pic.twitter.com/slgCIjxgxu


Does explain a lot.


I think this sums up how we got where we are as a country. pic.twitter.com/4fSf4UvsGA