Am I an idiot?

This is Joseph.
Mark had a polite comment on one of the positions that I held:

Conventional pundit wisdom was that Trump's statements about defending Social Security and Medicare had inoculated the GOP against that line of attack. Pundits can be idiots

While I hope I avoid the full "idiot" level, I thought it was worth reflecting why my analysis was wrong. After all, numbers like this need to be explained if you think that people just assume social security and Medicare are safe from Republican meddling: 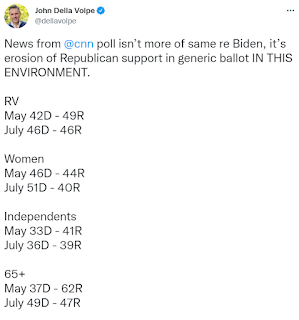 That is a 15 point drop on the generic ballot in two months among the 65+ crowd.

I think it is important that we be accountable when we are wrong. So what did I miss?

Pondering it for a while, I think I overlooked the real impact of the Supreme Court, in general, and Dobbs, in particular. The quest to overturn Roe versus Wade goes back to the 1980's and Ronald Reagan. But after 50 years this could be dismissed as posturing, after all the ruling had survived two generations of judges who were heavily Republican appointed. But then, one day, it happened.

This seems to me to have had two immediate implications.

If I am correct, the implication of abortion is far beyond just the backlash against a known right. It suddenly made the Republican party look like they would do extreme and/or crazy things. Can people like that be trusted with power?
The supreme court continues with rulings that at least appear to be partisan. Which only makes matters worse. Remember, the same pundits who claimed that people were overwrought about abortion rights are not anywhere near as credible now. Nor is there a great deal of evidence that lawyers think the opinion was especially sound.
So my gut instinct is that I missed a tipping point, where the old "they would never do that" claims of the pundit class suddenly lost efficacy and voters became alarmed at what could happen next. As they probably should be.
Posted by Joseph at 8:00 AM