Remember when we said the data was thin? Well, it's getting a little thicker

Very quick addition to our political implications of Dobbs thread. Just to recap...

In May, we argued that the conventional wisdom was underestimating the disconnect between state level views on abortion in the willingness of Republicans to push the most extreme laws imaginable (the Alaska Paradox)

Last month, we pointed to polling that suggested that even in strongly anti-abortion states, overturning Roe and its aftermath were not popular. (The data are thin but still worth keeping an eye on)

Which brings us to today's news.

Kansas is pro-choice, but just barely. By comparison, Oklahoma is moderately pro-choice and Ohio is solidly pro-choice. 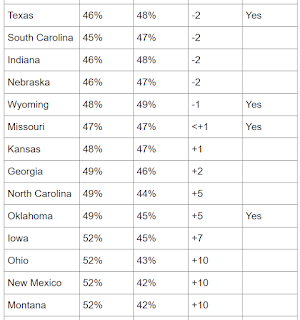 In both of those states, the legislatures pushed through extreme anti-abortion laws, recently enough that we don't know how they will play with voters. In Kansas, however...

Kansas voters overwhelmingly shot down an amendment that would have stripped their constitution of its state Supreme Court-interpreted abortion protections Tuesday, a surprising outcome on the heels of a wave of last-minute enthusiasm from those furious at the Supreme Court’s decision overturning Roe v. Wade.

For observers looking to Kansas as a bellwether, the first state to put abortion to a vote since the Dobbs decision, the election may prove a compelling data point given the built-in advantages to the pro-amendment side.

More than 60 percent of voters had rejected the amendment when networks, including NBC and CNN, began to call the race shortly before 11 p.m. ET. Roughly 78 percent of the vote had been counted. Preliminary results suggested that Tuesday’s turnout had come close to doubling 2018’s primary turnout.

Remember that Republicans scheduled the Kansas abortion referendum for the primary rather than the general election because there are many more registered Republicans in the state than Democrats and unaffiliateds can’t vote in primary races. Abortion rights still won handily.