First off, the decision of the New York Times to even conduct a presidential poll more than two years before the election is irresponsible and bad for for Democracy. It distracts from important conversations and, since the data are largely worthless,  its main function is to introduce noise into the conventional wisdom.

But while the data are not worth wasting any time analyzing, the analysis in the NYT piece by Michael C. Bender is worth talking about, and I don't mean that in a good way. This represents a disturbing throwback to the wishful analytics of the second half of 2015, showing that many data journalists and the publications that employ them have learned nothing in the past seven years.

Back in the early (and not so early) days of the last Republican primary, 538, the Upshot, and pretty much everyone else in the business were competing to see who could come up with the best argument for why being consistently ahead in the polls was actually bad news for Trump. These arguments, as we pointed out at the time, were laughably bad.

Just as being ahead in the polls was not bad for Trump in 2015, the results of this poll (to the extent that they have any meaning) are not bad for Trump in 2022. When elections approach, parties tend to converge on whoever has the clear plurality, and 49% is a big plurality, particularly when a large part of it consists of people who are personally loyal to Trump rather than to the GOP. On top of that, 53% of self-identified Republicans had a "very favorable" opinion of the former president and 27% were "somewhat favorable."

80% favorable is a good number.

Politically, this is a time of tumult, and all predictions at this point are little more than educated guesses, but given the losses and scandals Trump had seen by the time this poll was taken, his support was remarkably solid, which is the opposite of how Bender spun it.

And it gets worse

Here's the headline and the beginning of Bender's piece. [emphasis added.]

Half of G.O.P. Voters Ready to Leave Trump Behind, Poll Finds

Far from consolidating his support, the former president appears weakened in his party, especially with younger and college-educated Republicans. Gov. Ron DeSantis of Florida is the most popular alternative.

By focusing on political payback inside his party instead of tending to wounds opened by his alarming attempts to cling to power after his 2020 defeat, Mr. Trump appears to have only deepened fault lines among Republicans during his yearlong revenge tour. A clear majority of primary voters under 35 years old, 64 percent, as well as 65 percent of those with at least a college degree — a leading indicator of political preferences inside the donor class — told pollsters they would vote against Mr. Trump in a presidential primary.

Notice the phrase "GOP voters." That 49% refers to the respondents who said they thought they would vote in the Republican primary. Among that group, those who identified as Republicans went for Trump over DeSantis 56% to 21%.

If we're talking about who is likely to be nominated (which is, as mentioned before, an incredibly stupid and irresponsible question to be asking more than a year before the election), people who say they are going to vote in the primary are a reasonable group to focus on, but they cannot be used interchangeably with Republicans, which is exactly what Bender does.

While we're on the subject, this was a survey of 849 registered voters, so when we limit ourselves to those who said they were going to vote in the Republican primary then start slicing and dicing that, we are building big conclusions on a foundation of very small numbers. 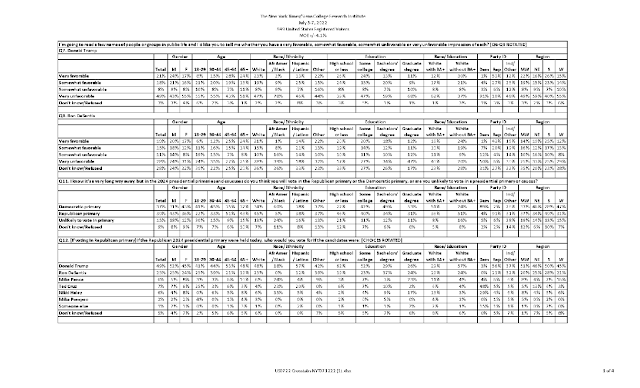 And it gets worse. [Emphasis added]

While about one-fourth of Republicans said they didn’t know enough to have an opinion about Mr. DeSantis, he was well-liked by those who did. Among those who voted for Mr. Trump in 2020, 44 percent said they had a very favorable opinion of Mr. DeSantis — similar to the 46 percent who said the same about Mr. Trump.

Should Mr. DeSantis and Mr. Trump face off in a primary, the poll suggested that support from Fox News could prove crucial: Mr. Trump held a 62 percent to 26 percent advantage over Mr. DeSantis among Fox News viewers, while the gap between the two Floridians was 16 points closer among Republicans who mainly receive their news from another source.

Here's a fun bit of context. Fox has been maxing out its support of DeSantis for years now.

The details of this staged news event were captured in four months of emails between Fox and DeSantis’ office, obtained by the Tampa Bay Times through a records request. The correspondences, which totaled 1,250 pages, lay bare how DeSantis has wielded the country’s largest conservative megaphone and show a striking effort by Fox to inflate the Republican’s profile.

From the week of the 2020 election through February [2021], the network asked DeSantis to appear on its airwaves 113 times, or nearly once a day. Sometimes, the requests came in bunches — four, five, even six emails in a matter of hours from producers who punctuated their overtures with flattery. (“The governor spoke wonderfully at CPAC,” one producer wrote in March.)

There are few surprises when DeSantis goes live with Fox. “Exclusive” events like Jan. 22 are carefully crafted with guidance from DeSantis’ team. Topics, talking points and even graphics are shared in advance.

Once, a Fox producer offered to let DeSantis pick the subject matter if he agreed to come on.

If I were DeSantis's campaign manager, this poll would scare the shit out of me. Fox has pushed him to a degree unprecedented for a politician at that stage of his career. He has also gotten tremendous (and appallingly credulous) coverage from the mainstream press, but he just doesn't register. I know political scientists and data journalists don't like to talk about things like personality, let alone charisma, but for whatever reason, DeSantis has not made much of an impression.

It's possible cataclysmic events (of which we're seeing a definite uptick) will hand the Florida governor the nomination or maybe even the presidency, but if this poll had any meaning, it would be bad new for him and good news for Trump.

And it gets worse.

The article was published on July 12th and immediately became part of the conventional wisdom. A little less than a month later, the FBI raided Mar-a-Lago, and the "Republicans are moving on from Trump" voices suddenly grew quieter, as even the highest ranking party members responded with unhinged accusations and threats of retribution. Though the pundits desperately wanted to believe otherwise, they  had to acknowledge that the GOP still belongs to Donald Trump.