This is Joseph.
I think that this tweet gets the dynamics of the situation incorrect: 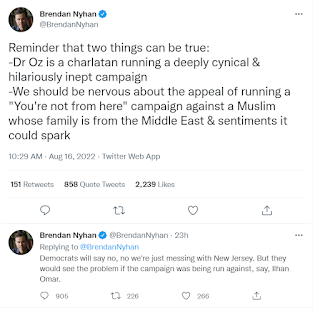 I think that this misses just how much restraint there actually has been. Dr. Oz was born in the United States but did his military service in Turkey to retain citizenship. Note that the attacks on Dr. Oz have been all about his living in New Jersey despite the dual citizenship issue being right there.
Nor is this concern unique to Dr. Oz. Ted Cruz felt it necessary to renounce his Canadian citizenship due to being a US senator. Rishi Sunak, a UK politician running for leader, returned his US Green Card after he joined the cabinet. Yet this has been a very understated vision. Instead the focus has been on the person in question not being resident in the state.
To address the Ilhan Omar point: if she chose to run as a senator in North Dakota, because there was a promising opening there, without relocating then I am quite sure that people would ask whether that made her a good representative for a state in which she has no personal stake. Or consider Michael Ignatieff -- a former leader of the Canadian liberal party. He left Canada for the UK as a young college graduate and ended up at Harvard University. After 27 years abroad, he returned to the University of Toronto and then became the head of the Liberal Party. He was promptly beaten in the subsequent election, it being a very bad outcome, resigned, and then, two years later, he went back to the US. His lack of time in Canada was a big deal:

Ignatieff was also subject to scathing attack ads by the Conservative Party, slamming him as "Just visiting" Canada for the sake of political advancement

So one should be prepared for these issues when running for political office.
Has it been done well? Yes, look at Hilary Clinton. After her husband finished as president, they were inevitably going to move somewhere. They picked New York, where she decided to run as a senator. She bought a house in New York in 1999 that remains a primary residence to this day. She visited the entire state as a way of showing her interest in it and directly engaged the outsider issue. This was a white person born in Chicago who did her university work in New England.
So, I think that this is a reasonable and common line of attack. Politicians for the senate are elected, so far as I can tell, on: a) Party loyalty, b) Policy positions, and c) Are they a good fit to represent the people of a state. The questions being asked now are really relevant and Dr. Oz needed to act like Clinton and get ahead of the issues (by a couple of years) by carefully planning his argument for how he makes a good representative. Also, when there is a weak point, you should lean into the other issues but I don't see a lot of policy that he is well suited to go after. His website says things like:

Dr. Oz seeks to rebuild the middle layers of society – institutions like family and community – that have been hollowed out by failed policies, narrow thinking, and toxic culture wars. He knows that no government can substitute for the dignity of work, the security of health care, and the spiritual support of our family

Worthy goals but what about Dr. Oz makes him uniquely suited to helping the middle layers of society? The recent grocery store video looked like an out of touch rich guy. Now maybe this is unfair but these issues continue to enhance the representation piece, without any comment on his background (for the record, he was born in Ohio).
So I think the effectiveness of this line of attack is due to a lack of careful pre-emption and that this is just a really basic point that candidates need to think carefully about.
Posted by Joseph at 10:00 AM