That sense of living in a science fiction novel

As previously mentioned, I'm working on a project about technology. One of the central points is the ways we think and feel about technology -- the language, the attitudes, the mental frameworks -- were largely in place by the early 20th century, and became set in the post-war era.

When people internalize their reactions to abnormal conditions, unconsciously continue to respond to new things in old ways, The result is seldom good. We'll delve more into that later. For now, we're still in the anecdote and data gathering stage of the process, so here's an excellent example of how even the most sober observers of the period were so conscious of how astounding the times were that they explicitly described the advances of the time in terms of science fiction novels (even before the term "science fiction" had been coined).


We know that at the time of the first official experiment, the two navigators of the Goubet remained  eight full hours under water without any other communication with the outside world than the telephone wire that they used to give their impressions, which, by the way, were of a cheerful character. When they made their appearance, they were fresh, well, and lively, having been able to attend to all the functions of life, and being ready to begin again. There was still in the tubes enough oxygen to last twenty hours.

It has been said of the Goubet that it is a realization of the dream conceived by Jules Verne in his "Twenty Thousand Leagues under the Sea;" but the Goubet is better than that. It is not only one romance, but it is rather two of the great amuser's romances amalgamated. It is both "Twenty Thousand Leagues under the Sea" and " Doctor Ox" in action! 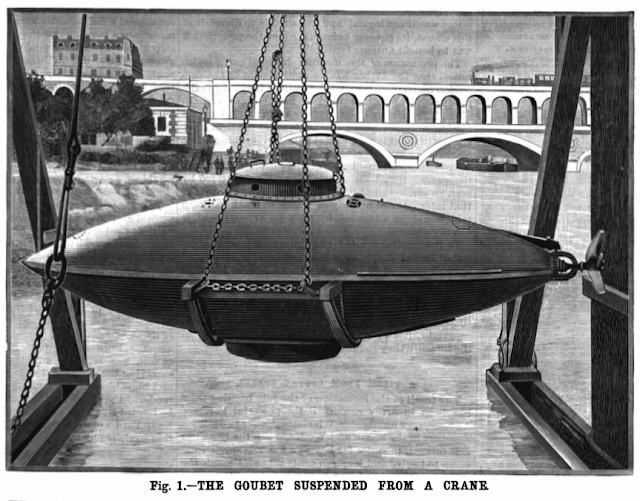