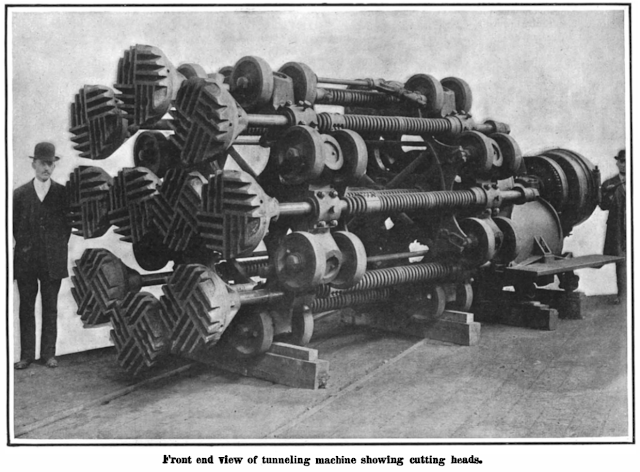 With all this discussion of hyperloops and tunneling technology, I thought this would provide some interesting context (and an excuse to post a couple of cool pictures). I found the last paragraph particularly interesting. Notice how even more than a hundred years ago, people recognized the tremendous potential of fast, cheap tunneling.

Like the poor, new ideas for tunneling through rock and doing away with drilling and powder and dangerous blasting, are forever with us. Since 1853 there have been no less than sixty-nine patents granted on tunneling machines, and of this number but three have progressed beyond the blue-print stage. One was constructed and used with some slight success in the East, but owing to lack of funds or disputes among its builders, all progress was stopped. The second was built in Colorado, and at the present time is installed in a tunnel near Boulder. This machine does the work claimed for it, but the cutting is very irregular, numerous breakdowns are constantly happening, and in the course of over six months the machine has penetrated but a few hundred feet.

The third machine, here illus­trated, was invented by Mr. Sigafoos, of Denver, long associated with many eastern manufacturers until of late, when he turned his mind and labor toward western mining fields. Mr. Sigafoos built his first model three years ago, and until the present day it is on exhibition in his offices. Even this little working model, barely two feet long, has eaten through solid granite quite as easily and determinedly as a hungry earthworm.

Early in January of this year the first regular-sized machine was constructed in the East and shipped complete to Georgetown, Col., where the first contract was let and its behavior eagerly watched. The utmost secrecy was observed, for the first trial, and the author was extremely fortunate in being allowed to witness the test. In every instance the rotary proved its value, and came up to the highest expectations. Mr. Sigafoos stands ready to take contracts with his machine, in any and all rock, and will guarantee to cut five feet an hour, twenty-four hours a day.
...

It may not be amiss to state that the famous Moffat road will probably use these large rotaries in cutting its great tunnel through the mountains. In places today where the road ascends and descends mountains, it is expected within a short time to eventually bore through them, cutting down the time from coast to coast fully twenty-four hours. The contractors, before learning of the new machine, allowed ten years for the completion of this gigantic undertaking; but today, with a sufficient number of tunnel rotaries at work, two years will not be an impractical limit. The immediate uses to which this machine can be put to work are innumerable. Subways that formerly took five years to construct can now be run for half the expense in one-tenth the time. Water in unlimited quantities can be brought through the mountain walls, and the vast arid areas of the deserts will be made to blossom as a wonderful garden. If the claims made for it continue to be substantiated in practice, Mr. Sigafoos may well be considered a world's benefactor in giving us this marvelous rotary tunnel machine. 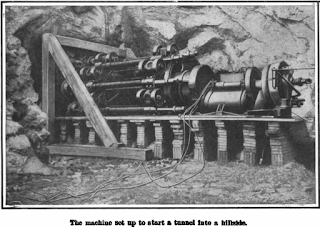