When Threads collide -- the MAGAization of crypto

The public face of cryptocurrencies and NFTs may be liberal celebrities and trendy lifestyle journalists, but the political faction that has really embraced Web3 leans hard to the right.

Just look at who is out promoting bitcoin now ... Jordan Peterson, Ted Cruz, and Tucker Carlson.

It should be extremely evident now where that space is heading. https://t.co/7tQFHJnvx5

Looks like the absolute craziest Americans are lining up to shill for crypto coins. It's pretty crystal clear which side crypto folks are on now. https://t.co/WaWtxgmf4r


Also, and for the record, public disclosure forms show she holds low- to mid- 6 figures worth of BTC

And this from the Verge:

But very little of that was discussed at today’s press conference. The event kicked off with three of the protest movement’s organizers, including Tamara Lich, a former fitness instructor and singer in an Alberta band called Blind Monday, who played a prominent role in organizing a GoFundMe campaign that raised about 10 million Canadian dollars ($7.8 million) for the anti-vaxx protest.

After spending several minutes disparaging “fake news” and praising supporters like Jordan Peterson, a philosopher whose work is admired by the right, the group turned to Bitcoin.

BJ Dichter, who introduced himself as “vice president and spokesperson for the Freedom Convoy,” said the group has been in touch with “some of the most prominent Bitcoiners on YouTube” to learn how to use cryptocurrency to raise money for their cause. (GoFundMe shut down the group’s fundraising campaign last week, citing “violence and other unlawful activity” during the demonstrations.)

Dichter turned the press conference over to a man named “Nick” who he described as the group’s “Bitcoin team lead for the Freedom Convoy.” Nick, sporting a thick beard and a black sweatshirt with the Bitcoin logo in the upper-right corner, started by setting expectations. “I wouldn’t call myself an expert,” he said. “But I am a liaison to the experts in the Bitcoin world.” Nick said the aim was to fight for the group’s freedom to raise money “without being shackled by the censorship put in place by our legacy financial system.”

After several minutes of a lecture on the advantages of a decentralized fundraising platform, supporters watching the livestream seemed flummoxed.

“This is not what I thought it would be, thanks guys but I’m thinking you will be losing some money support with this... anyway, have a good day,” wrote one commenter. Others implored the group to ditch the Bitcoin talk and get back to the issue at hand: truckers fighting against vaccine mandates.

“I get the safety of donating to Bitcoin… but why are we promoting digital currency?!” another wrote.

In some respects, the convergence of the anti-vaxx protests and Bitcoin was probably inevitable. Last month, the protests drew support from one of the biggest proponents of Bitcoin in the world, Tesla CEO Elon Musk, who tweeted “Canadian truckers rule.” Former President Donald Trump has voiced support, and right-wing figures from Tucker Carlson to Ben Shapiro to Michael Flynn have seized on the trucker protests.

The group sees Bitcoin as a possible solution to its fundraising woes. And they may have some support, too. A group of Canadian Bitcoin supporters who go by the moniker “HonkHonkHodl” [Here's a quick intro to HODLing -- MP] have created a crypto crowdfunding campaign on the platform Tallycoin as an alternative funding portal for the Freedom Convoy.

In a less-than-surprising plot twist, the move to Bitcoin didn't work out that well for the truckers.

There’s lots of talk of needing money. “None of us know how to use that goddamn bitcoin,” says one guy.

“I’ve got kids… I need some money here. I can’t do this,” says another.

Conservatives and crypto is not just a North American thing.
Jemima Kelly writing for the Financial Times.

Long-time Alphaville readers will remember that back in 2018, after a certain cabinet minister — then a mere disgraced Tory MP — resigned from two appointments related to blockchain technology when we discovered a secret crypto pay deal, we saw it fit to initiate a series called “What’s the Tory crypto story?” (This title will resonate if you happen to be over the age of about 30 and British.)


After that slight embarrassment for now Transport Secretary Michael Green Grant Shapps, the Tory crypto train has kept on chugging merrily along. There was the spectacular flop of Tory Baroness Mone’s crypto project, EQUI; there was then-chancellor Philip “Spreadsheet” Hammond promoting blockchain as an easy solution for the Irish Borderproblem; more recently there was chair of the UK foreign affairs committee Tom Tugendhat preaching the virtues of crypto by deploying unforgettable syntax such as “when the queen’s head leaves the coin and goes on to the blockchain”. And before any of them, of course, there was David Cameron — a man known for his impeccable taste in all things financial.

It’s not just crypto; it’s blockchain too. In a November report entitled “BlockchainIndustry in the UK Landscape Overview 2021” by “Innovation Eye” and the “Big Innovation Centre”, the ruling party’s love affair with all things related to the distributed dream ledger over the past five years is charted. It’s a nice and politically informative chart: 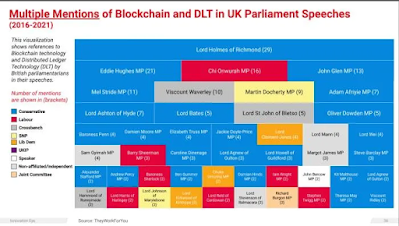 Just look at that sea of blue! If you’re wondering about the block of red in the second line, well that’s Chi Onwurah, Labour MP for Newcastle Upon Tyne Central, who has a background in technology. But when she mentions blockchain, it’s to say things like: “For some, blockchain is a way of avoiding government”, and that the “libertarian idea that technology is the answer to everything has driven our regulatory approach for too long”. Music to our luddite lugholes, tbh.

Over on the other side of the chamber, though, there’s a new crypto playa in town. And the new pusher of virtual currencies is none other than king of virtual tears himself, Mr Matthew Hancock, a former cabinet minster and now mere disgraced Tory MP (you might notice a theme).

None of this is all that surprising to those who have been following the story. If you push past the next-big-thingism and the Ponzi scheme aspects, the underlying appeal of Web3 has always been the libertarian wet dream of money and property freed from the tyranny of the state.

Of course, the fact that the current conservative movement is swarming with grifters has certainly sped things along.