This is Joseph
The blockage of the Ambassador Bridge, which was starting to hurt the US, is over but there are still blockades in place at the US border:

The Emerson MB border blockade is costing $73 million, daily.
$73 million. Every. Single. Day.
This is devastating for Manitoba businesses, large and small.
Enough politics. Support our economy, not just your base.

The truckers at the Alberta Coutts blockade had some impressive firepower: 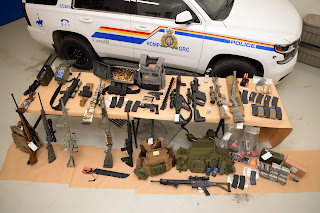 Meanwhile the chief of the Ottawa police has resigned. The replacement is focused on building up citizen trust after weeks of occupation: 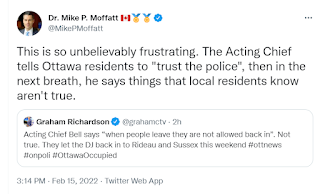 The good news is that the federal government is finally enacting a state of emergency, as a response to all of this. But at some point you cannot have a minority veto the policies of the majority. They should be allowed to protest but it has been weeks. The slow increase in weapons is also concerning; the latest being 2000 stolen guns in Ontario. It could definitely be a coincidence, but it is not a well timed coincidence for people worried about black market firearms filtering over to a protest.
Now by the time this is posted, it wouldn't be shocking if everything has been peacefully resolved; one of the hardest parts of this process has been seeing the lack of state capacity. Everyone has been puzzled by how bad the response has been, including people who focus on it:

Your Line editors remain somewhat baffled by the inability or unwillingness of the police to do their jobs. In Ottawa's specific case, Line editor Matt Gurney offered some possible explanations in a dispatch last week, but his sources only spoke to the challenge once the protesters were dug in. We can’t explain why they were able to dig in in the first place. Nor does Ottawa’s uniquely awful scenario apply to the blockades at the border crossings. It has seemed clear to us that while the tactical situation in Ottawa seems to have quickly forced the police into a shell-shocked defensive posture, there was more they could have done initially to contain the protest, and lots more that police could have done elsewhere. But they haven't been doing so, and it is not clear why. Is the problem that they need more powers? And if so, has Trudeau now given them what they actually needed? Or was something else missing that the Emergencies Act now gives them?

Nor does anybody seem to care about the economic costs of the blockades, either in terms of money or in terms of the reliability of Canada as a trading partner.
So stay tuned to see if a G7 nation can really be trying to handle an armed insurrection with traffic tickets and noise complaints.