Ten years ago at the blog

[If I'd been more diligent, I would have looked up the menu of one of the restaurants. These prices are ten years out date, but assuming they haven't gone down...] 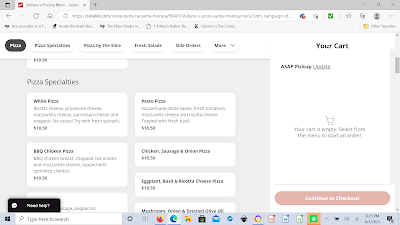 Salmon/Fung cage match -- Did Salmon use a representative example?

Felix Salmon is one of the sharpest business and finance bloggers out there but I've never quite shared his enthusiasm for the Groupon business model. Disagreeing with Salmon on business matters makes me a little nervous, so I feel a bit better to have Kaiser Fung on my side.

Fung (who shares my high opinion of Salmon's acumen) has a good take-down of Salmon's analysis. You should probably read the whole thing but there's one particular aspect that strikes me as requiring additional attention.

At Giorgio's, for instance, diners paid $15 for their Groupon -- which gave them $30 of food. But dinner for two at Giorgio's, with some kind of alcohol, can easily run to $100 or more. So even after knocking $22.50 off the bill (remember that Giorgio's kept $7.50 of the proceeds of Groupon), the restaurant would often still make money.

So, I don't think the Groupon model is the kind of slam dunk Felix seems to think it is. Only if certain conditions are met will the merchants gain anything from Groupon:

Of course, that $7.50 doesn't take into account the cost to the restaurant of preparing and serving the meal (which would further help Fung's case), but putting that aside, how likely are customers to overshoot by a factor of three?

Looking at the offers currently on Groupon, I see three restaurants, Beto's Grill ($20 for $10), Stefano's Pizzeria ($20 for $10) and Henry's Hat ($35 for $15). Of the three, I'm only familiar with Henry's Hat (a game themed bar that, last time I was there, had Kruzno in its library), but, based on the information online, it would be fairly easy for two people to keep the tab down to close to the amount of the Groupon offer in all three.

Obviously, there are plenty of places in LA where you should plan on paying big money for your dinner, but I haven't noticed those places on Groupon. Instead I've seen a lot of moderately priced spots, and I doubt you've got a lot of couples running up a $60 dollar tab on three buck a slice pizza.
[Joseph weighed in the next day]

As a follow-up to Mark, the comment thread to this post is worth reading. One clever reader noted, in the S-1 groupon just filed:

Our merchant arrangements are generally structured such that we collect cash up front when our customers purchase Groupons and make payments to our merchants at a subsequent date. In North America, we typically pay our merchants in installments within sixty days after the Groupon is sold. In most of our International markets, merchants are not paid until the customer redeems the Groupon.

Now you match this up with this, admittedly anecdotal example:

A good mate who owns a restaurant and did one of these deals after said it was outright amazing - many people would come in and spend EXACTLY the amount of the coupon. They didn't want to go 50c under and heaven forbid they went 50c over and have to pay more at full price

Even worse, you seem to have to more effects. One is a priming effect. New customers assume your $30 entree is worth $15. That is poison. The second is that merchants have begun to do things like "Groupon lines" (rational from their point of view to focus on the full-paying customers first) that reduce the value of the service.

So the business model involves a slow reimbursement to the merchant (waiting for money is death in a small business where cash flow issues can be fatal), enormous discounts (typically 75% off, with the last 25% coming in slowly), and "bargain hunters" who are unlikely to become regular customers.

As a final point, consider:

Perhaps Groupon management thinks it is creating a sustainable Prisoner’s Dilemma, one that ultimately destroys value for the local merchant ecosystem but benefits Groupon. In other words, Groupon could grow so big that local merchants have to use it, even though it ultimately hurts them. In game theory terms, Groupon creates an equilibrium point at “All Local Merchants Defect,” and then, having forced merchants into this value-destroying equilibrium, takes a cut for having rigged the game. Obviously, Groupon couldn’t share this thinking publicly. They would just continue to use the attract-loyal-new-customers argument even though it no longer makes any sense for a ginormous Groupon.

This may sound cynical. But if this is Groupon’s game plan, it isn’t cynical. It’s naïve. Most local merchants simply don’t have enough value in their collective ecosystem to share anything remotely like this much value with Groupon. This isn’t a stable equilibrium, it’s a suicidal one. The local merchants will have to stop using Groupon en masse not long after they first start experimenting with it.

The only way this works is if process quadruple for restaurants (because everyone uses a groupon). Maybe more than quadruple because you replace cash in hand with a 60 day payment. Why would restaurants not break this equilibrium and offer 60% off if you show up without a groupon? Immediate cash in hand, much higher profits, the customer pays less and they don't have to buy a groupon in advance.

And if you don't get this type of prisoner's dilemma, then it is hard to see where the sustainable value is going to be in this business model when your clients will eventually hate you.
Posted by Mark at 9:00 AM