With IP law, you know in advance that the big boys are heavily favored to win. The suspense is in the legal twists and turns getting there.
From Terence Chua's thesis, "Messing with the Mouse."

In 1971, Disney sued a group of underground comic artists calling themselves the Air Pirates, who published two comics portraying Walt Disney characters in sex and drug-related situations. The resulting case lasted 8 years and ended in a settlement where both sides claimed victory. This thesis uses the case to examine the development of the law of copyright and parody as a defense and demonstrate that the court tends to rule against the parodist if the work is offensive or obscene, although these are irrelevant concerns. It also examines the case itself and the cultural and personal forces motivating the parody.

O'Neill's affidavit was positively lyrical in justifying the artistic reasons behind Air Pirates Funnies, but it contained language that ultimately proved damaging to the Air Pirates' arguments. O'Neill stated that he drew cartoons to "relieve a basic human anxiety pattern, hysteria," by means of laughter. Mickey Mouse, he deposed, had started as a positive image, but as people grew older, it became a "non-positive adjective." To investigate why it had degenerated, O'Neill said he "chose to parody exactly the style of drawing and characters to evoke the response created by Disney (emphasis in original)."
...

[From here on, all emphasis added]

The Ninth Circuit delivered its 15-page decision on September 5, 1978, ruling three to zero against the Air Pirates on the charges of copyright infringement. Judge Walter J. Cummings, a sixty-year-old former Assistant United States Solicitor General and former partner in a Chicago-based law firm appointed to the bench by Johnson, penned the judgment. ... Cummings then considered fair use as a defense. He noted that the Pirates were not saying that the copying was not substantial enough to be infringing, merely that the infringement was defensible as an example of parody and thus fair use. Noting that Loew's case was the legal standard, the court found that Wollenberg's test of "substantial copying, combined with the fact that the portion copied constituted a substantial part of the defendant's work" that "automatically precluded the fair use doctrine" was unjustified. Such a reading would make any defense of fair use untenable, and would lead to a gap where a substantial amount was taken but not a substantial part of the defendant's work. Loew's was more properly read as "setting a threshold that eliminates from the fair use doctrine copying that is virtually verbatim," as in Jack Benny's burlesque of Gaslight. Loew's, in other words, was the upper limit to tell what was definitely not fair use. In the absence of "near-verbatim copying", the test would be Berlin's, as in whether the parodist had taken up more than was needed to "recall or conjure" the original.

The Ninth Circuit decided that the Pirates had done more than was needed. Ironically, the ubiquitous presence of Disney's characters in popular culture that made them such attractive targets was precisely why the Pirates had gone too far. Cummings wrote, "Given the widespread public recognition of the major characters involved here... very little would have been necessary to place Mickey Mouse and his image in the minds of the readers." He noted that Pirates did not parody how the characters looked, but their "personalities, their wholesomeness and their innocence." The Pirates would therefore have had a better argument if they had "paralleled... Disney characters and their actions in a manner that conjured up the particular elements of the innocence of the characters to be satirized... Here, the copying of the graphic image appears to have no other purpose than to track Disney's work... as closely as possible." Cummings dismissed the Pirates' arguments that they had to copy Disney exactly to make their point effectively. They were entitled to parody, but they were not entitled to the "best parody" they could make – that consideration had to be balanced with the rights of the copyright owner, and the Pirates had exceeded what was "necessary to place firmly in the reader's mind the parodied work and those specific attributes that are to be satirized." Because of this, Wollenberg's granting of summary judgment on copyright infringement was proper.

"Communiqué #1" goes on to criticize the Ninth Circuit's decision in the Air Pirates case as being too vague. Misidentifying the Ninth Circuit as the "Supreme145 Court", O'Neill quotes the court as saying that the Pirates had taken too much of the original when effecting their parody. Although "'some' says the Court, is OK... no one, including the Court, is sure how much is 'some'..." O'Neill juxtaposed this with a drawing of Mickey's head on a realistic rat's body, its tail curled around a sign that says, "Is this some?" Minnie also points to her gloved hand – which has five fingers instead of the usual cartoon four – with a caption, "Is this some?"

Something about the "best parody" section seems particularly off. It was not the juvenile and deliberately offensive attempts to shock that did the Air Pirates in but the loving homage. Though there was little that could be called copying -- only a few of the images call back directly to the source material --  O'Neill and friends beautifully captured the style and the sensibility of the original Gottfredson strips.
One of the many ironies of this case is that had the artistic quality of the parody been worse, the defendants' legal case would have been stronger,
And that doesn't seem right. 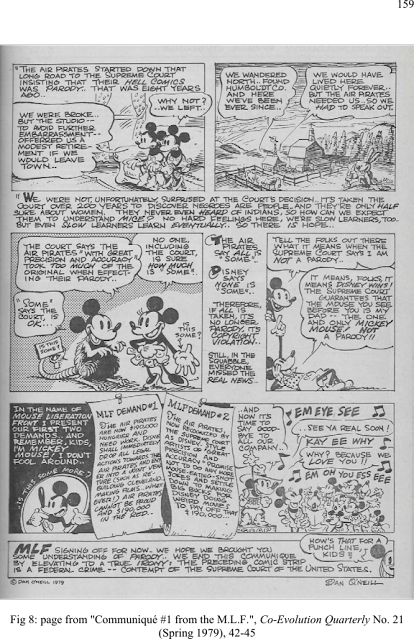