"EMPLOYMENT OF HIGH-FREQUENCY CURRENTS IN THERAPEUTICS."

I was about to start speculating about the propensity of Turn of the Century scientists to announce major discoveries only to have the effect sizes later turn out to vanish entirely, but then I realized I wasn't entirely sure that this was the case here.

I'm almost certain that this belongs in the same file with N-rays, but given the readership of this, I want to be extra careful.

The patient is seated on a chair inside of a spiral coil of wire which is traversed by high-frequency currents. (Fig. 1.) The cabinet shown at the right of the photograph contains a transformer, which gives to the alternating current a tension 01 40,000 or 50,000 volts and a frequency of 500,000 or 600,000 alternations per second. This treatment, continued' for five minutes, reduced the arterial pressure from 10 to 7 inches. In a second treatment, given to the same patient a few days later, the arterial pressure, which had risen during the inteI val to 8 inches, was brought down below 7 inches in a few minutes. Repeated applications gradually reduce the arterial pressure to its normal value of 6 inches. In Dr. Moutier's very interesting experiments, the rapidity with which the pressure was lowered appeared to have no relation to the age or. gravity of the case, or the degree of hypertension, but to depend chiefly on the state of digestion. 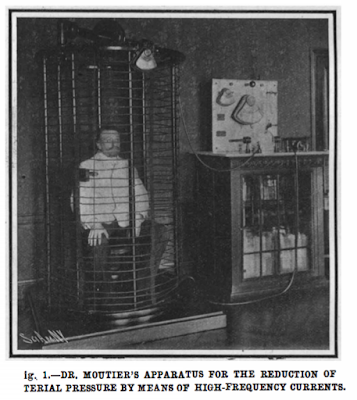 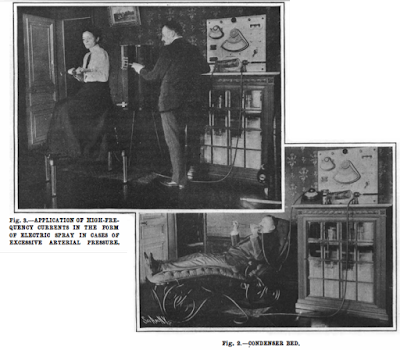