"The joy of the bezzle" -- Crypto, meme stocks, housing bubbles and inflation

Which brings us to John Kenneth Galbraith's bezzle.

Alone among the various forms of larceny [embezzlement] has a time parameter. Weeks, months or years may elapse between the commission of the crime and its discovery. (This is a period, incidentally, when the embezzler has his gain and the man who has been embezzled, oddly enough, feels no loss. There is a net increase in psychic wealth.) At any given time there exists an inventory of undiscovered embezzlement in—or more precisely not in—the country’s business and banks.

This inventory—it should perhaps be called the bezzle—amounts at any moment to many millions of dollars. It also varies in size with the business cycle. In good times, people are relaxed, trusting, and money is plentiful. But even though money is plentiful, there are always many people who need more. Under these circumstances, the rate of embezzlement grows, the rate of discovery falls off, and the bezzle increases rapidly. In depression, all this is reversed. Money is watched with a narrow, suspicious eye. The man who handles it is assumed to be dishonest until he proves himself otherwise. Audits are penetrating and meticulous. Commercial morality is enormously improved. The bezzle shrinks.

From the Bezzle Years by John Kay

In a delightful essay, Warren Buffett’s business partner, Charlie Munger, pointed out that the concept can be extended much more widely. This psychic wealth can be created without illegality: mistake or self-delusion is enough. Munger coined the term “febezzle,” or “functionally equivalent bezzle,” to describe the wealth that exists in the interval between the creation and the destruction of the illusion.

From this perspective, the critic who exposes a fake Rembrandt does the world no favor: The owner of the picture suffers a loss, as perhaps do potential viewers, and the owners of genuine Rembrandts gain little. The finance sector did not look kindly on those who pointed out that the New Economy bubble of the late 1990s, or the credit expansion that preceded the 2008 global financial crisis, had created a large febezzle.

The joy of the bezzle is that two people – each ignorant of the other’s existence and role – can enjoy the same wealth. The champagne that Enron’s Jeff Skilling drank when the US Securities and Exchange Commission allowed him to mark long-term energy contracts to market was paid for by the company’s shareholders and creditors, but they would not know that until ten years later. Households in US cities received mortgages in 2006 that they could never hope to repay, while taxpayers never dreamed that they would be called on to bail out the lenders. Shareholders in banks could not have understood that the dividends they received before 2007 were actually money that they had borrowed from themselves.

Kay wrote that essay in 2015, a period which seem insane at the time (where could you go after MoviePass?) If only we had known that the "lose money on every transaction then make it up in volume" model would be pushed aside by something crazier and of far greater magnitude.

In 2021, the bezzle grew to unimaginable proportions. Imagine a well-to-do family sitting down to calculate their net worth last December. Their house is worth three times what they paid for it. The portfolio's doing great, particularly those innovation and disruption stocks they heard about on CNBC. And that investment they made in crypto just for fun has turned into some real money.

Now think about this in terms of stimulus. Crypto alone has pumped trillions of dollars of imaginary money into the economy. Analogously, ending the bezzle functions like a massive contractionary tax. Markets returning to rationality is seen as taking away money from investors. [Emphasis added.]

New CEO Barry McCarthy took the helm in February and has vowed to turn around the company, which had been thriving during pandemic lockdowns but is now struggling with slowing demand. But he has dismissed the idea of selling the business—irking investors like Blackwells, which says that Amazon.com Inc. and others could be bidders.

Peloton co-founder John Foley was removed from the CEO job in February’s shake-up, but remains executive chairman and is part of a group that controls the company with super-voting stock. That limits the power of an investor like Blackwells to force Peloton’s hand.

“No shareholder should want Mr. Foley to still sit atop the management pyramid or control the board through his super voting-stock. He lost his entitlement to both positions when he destroyed $40 billion of shareholder wealth in less than a year.”

In response, Peloton said it “appreciates the views of our shareholders and have acted, and will continue to act, in the best interests of all Peloton shareholders.”

McCarthy, a former finance executive at Netflix Inc. and Spotify Technology SA, has been working to boost Peloton’s revenue from services -- as opposed to hardware.

Of course, that $40 billion of shareholder was no more destroyed than the value of a diamond is destroyed when the appraiser reveals that it's paste. The difference between Peloton trading at 160 and at 10 was pure febezzle. 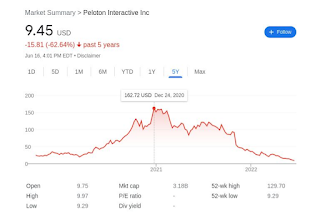 Of course, economic contraction is always painful, but at the moment it's not the worst imaginable outcome.


possible that the Fed won't have to do any more tightening because the collapse of crypto will remove enough wealth and demand from the economy on its own.

I suspect Marshall was joking but he might not have been entirely wrong.