Not long ago, Marvel managed to get a couple of unlikely hit movies out of a fairly obscure motor-cycle riding character called. Ghost Rider. That unexpected success has led to some lawsuits over who owns the character.


NEW YORK (Reuters) - A comic book writer who claims he created the flaming-skulled character called Ghost Rider got another chance to press his claim on Tuesday when a U.S. appeals court revived his lawsuit against Marvel Comics.

The 2nd U.S. Circuit Court of Appeals vacated a 2011 district court ruling that found the rights to the character belonged to Marvel Comics, owned by The Walt Disney Co. It returned the case to the lower court for trial.

Former Marvel freelancer Gary Friedrich, who claims he created the character, will pursue the case "aggressively and vigorously," his lawyer Charles Kramer said.

Ghost Rider, a motorcycle-riding vigilante whose head is a flaming skull, first appeared as a vigilante superhero in 1972.

It turns out that the 1972 character was something of a reboot of a Western-themed Ghost Rider Marvel launched in 1967 (again with the involvement of Gary Friedrich) and that's where the intellectual property question gets amusing because that incarnation was perhaps the most blatant example of plagiarism in what has always been a plagiarism-fueled medium.


Stan Lee's claims in the Sixties that he didn't read other comic books were a lot like Milton Berle's claims that he didn't listen to other comics' material. Lee had spent two decades in a closely-knit industry jumping on trends and borrowing ideas, starting with DC and EC derived books and ending with an unacknowledged appropriation of Julius Schwartz' successful formula for rebooting Golden Age heroes with science fiction origins and streamlined looks.

The difference between Berle and Lee was that a large part of Lee's audience didn't get the joke. Many of them had gotten serious about comics in the mid-Sixties when Marvel had hit its stride and really was putting out the best and most innovative comics. For them, Lee's comically over-the-top claims seemed entirely reasonable.

It's safe to assume that in 1967, few of those teen aged fans had any idea that Marvel's new Western themed hero, Ghost Rider, had a strong resemblance to another company's hero, a resemblance that included having the same name, costume, concept, atmospheric look, and artist. The retread only ran for seven issues but that was enough for Marvel to claim ownership of the name and, a few years later, launch another Ghost Rider.


(Yes, that is a Frazetta cover)

And here's the Marvel version: 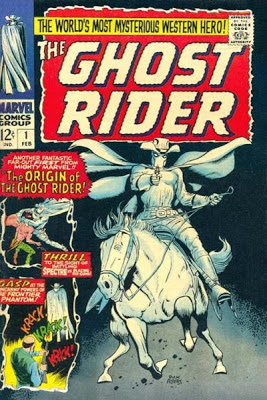 Of course, the idea to introduce a character by this name in 1949 may have had something to do with a hit song introduced in 1948 (and covered a billion times since).