House of Cards -- either already in the black or seriously underperforming

More from the ongoing Netflix thread, but I promise the end is near.


By adding more than 2 million U.S. subscribers this quarter and another 1 million elsewhere in the world, Netflix has nearly earned back its entire $100 million investment in House of Cards — in under three months. As we explained in our breakdown of the economics of that original show, Netflix only needed about 520,834 new users — in two years — to break even on that program. But the streaming and delivery businesses have added nearly $50 million in subscriber dollars in this country alone, Netflix announced in its earnings report Monday. If you include the overseas users, that number goes up to about $72 million.

Of course, not all of these new (paying) customers will stick around for two years — and Netflix has other costs besides its high-profile leap into original programming, including Hemlock Grove, which premiered this weekend, and the comeback of Arrested Development, which is expected to offer another subscriber boost when it debuts Memorial Day weekend. But CEO Reid Hastings [sic] said in his letter to investors Monday that fewer than 8,000 new users participated in "free-trial gaming — that is, hardly anyone signed up, binged-watched House of Cards, then quit Netflix. If the company keeps building loyal subscribers at this rate into 2014, when it premieres a new series from the Wachowskis, Netflix should be able to break even on all of its original programming — by our calculations, that would take 2.6 million new paying subscribers a month every per year — and then some.

The about free-trial actually is a piece of genuinely good news for the company, but that really spectacular part raises some questions, particularly when you follow the link in Greenfield's story:


Netflix announced net additions of 2.03 million subscribers in the U.S. compared to 2.05 million in the fourth quarter — which historically is its strongest period of subscriber growth — and 1.74 million in last year’s first quarter. As a result, it said that it’s growing its subscriber base and revenues faster than its content spend in the streaming business. It reported that its domestic streaming contribution margin increased to 20.6 percent in the quarter, which was up 140 basis points from the previous quarter

...
In addition to its domestic streaming numbers, Netflix reported 1 million new subscribers in its international business, growing that number to 7.1 million total. That compares to 1.8 million international subscribers added during the holiday quarter, and 1.2 million a year previous. While those numbers might seem low compared to previous quarters, Netflix said it benefitted from launches in new markets in earlier quarters. The company plans to continue its expansion overseas, with a new international market to be added in the second half of the year.

Just to review, in addition to launching a $100 million dollar series, they mounted a huge and very expensive marketing blitz in an improving economy, benefited from the increasing popularity of dropping cable, and offered a heavily advertised free month trial for what is already an extremely inexpensive service.

There are a lot of reasons I might be misreading this -- being LA-based I might be seeing a disproportionate amount of marketing; there may good news if you dig deeper into the numbers; I might just be screwing up -- but looking at these stories and trying to draw reasonable inferences about the accounts attributable to House of Cards, here's what I take away:

1. There's no evidence here that the show was responsible for any of those one million international accounts given the sharp drop;

2. With the LA caveat in mind, it looks like Netflix substantially increased its ads-and-flacks budget in the first quarter ("including advertising buys for primetime TV spots and high-profile billboards"). Twenty million strikes me as a fairly conservative estimate for the increase. If that's close, we're talking significant acquisition costs for what looks like a 300K bump; 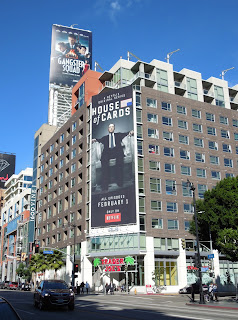 3. At least some of that 300K should probably be attributed to economic conditions and the widely noted trend away from cable and toward online viewing;

4. A good night at the Emmy's could change this, but, given the direct-to-binge model and the February debut, I'd expect most of the subscribers attributable to House of Cards to sign up sometime in the first quarter. The 520K Greenfield mentions does not seem to include marketing costs which would push it closer to 600K. This would require a substantial bump from the second season as well.

Don't get wrong. As a viewer, I'm very happy with this boom in original programming (my favorite show at the moment is Justified) and I'm looking forward to watching House of Cards. Nor should to much be read into the performance of one show. I'll even allow for the possibility the show catching on and/or of Netflix having a good run and actually becoming a major player for years to come.

What I have trouble with is declaring victory for a player who may not even be winning, particularly when that victory fits far too nicely with a dominant narrative.