Daniel Kuehn and Joseph previously discussed this post by Megan McArdle entitled "Department of Awful Statistics: Income Inequality Edition." They both make good points, but I'd like to approach this from the angle of appropriate visualization. McArdle supports her thesis that the middle class is neither disappearing nor getting poorer with charts derived from census table H-17 which you can and really should download here (the best way to keep us all honest is to play along at home).

The trouble is they're bad graphs.

To the extent that statistics includes data visualization, this is definitely bad statistics. When trying to depict trends and relationships, you generally want to get as much of the pertinent information as possible into the same graph. You don't want to force the reader to jump around the page trying to estimate slopes and compare magnitudes, nor do you want to take a few snapshots when you can easily picture all the data.

There are lots of acceptable ways of laying out the data table H-17, but I'm going just going to go with the simplest (partly because I like simple and partly because I'm doing this on Openoffice). As with McArdle's graphs, the numbers are inflation-adjusted. 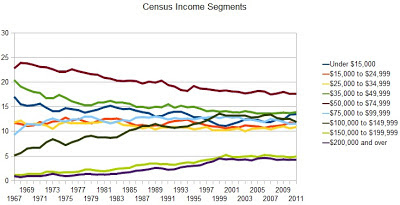 I'm not that comfortable with this data (for reasons I'll get to in a minute), but this does look fairly consistent with the hollowing out of the middle class with 35K-75K (the top two lines) dropping more or less steadily for decades. Also check out the more than fourfold increase of people making more than 150K,

The two main things that make me uncomfortable with the data are the start point (with falls close to at least a couple of inflection points) and, on a related note, the failure to account for the baby boom which was at the bottom of its earning power forty years ago and should be close to the maximum now.

As far as I can tell income distribution is not broken down by age in these tables (though I suspect the data are available on request). We can, however, answer the related question of what median income looks like when we control for age and extended over a longer interval. (Download table P8 from here) 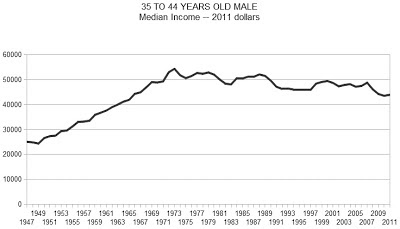 You can see why I was nervous about starting in 1967.

The question of income inequality and what's happening to the middle class is a complicated one and is probably best addressed by people who know what they're talking about, but if you are going to try to argue one side of the case graphically, you should at least take the time to use appropriate graphs.

p.s. I picked 35-44 because it seemed like a good representative mid-career interval and because, since I wasn't comparing different age groups, an uncluttered one-line graph seemed sufficient. If you prefer, here's the multi-range version (though I don't know if it adds much information). 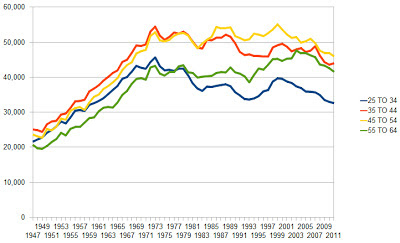