How to be a Tesla bull -- keep repeating EVs = Tesla 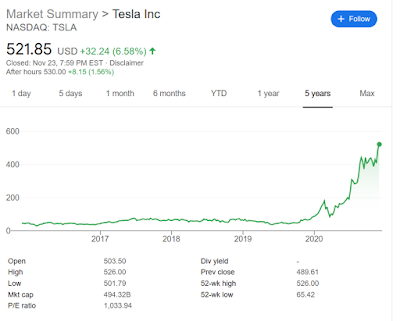 This is perhaps the primary pillar in all attempts to justify valuing a small, marginally profitable niche car maker at a larger market cap than the three biggest money-making auto companies combined. The arguments boil to "In the near future gas-powered autos will be phased out, therefore most cars will be made by Tesla." Bulls spend a great deal of time supporting the premise (which needs little support), and remarkably little arguing for the conclusion.

Recently one prominent analyst used this line of reasoning to defend a bull case for trading Tesla at a p/e of around 2000.

Tesla Inc. shares could double from current levels as global electric vehicle demand ramps up over the next five years, according to one Wall Street analyst.

Global demand for electric vehicles could reach 10% of auto sales by 2025, up from its current 3%, wrote Wedbush Securities analyst Dan Ives.

European efforts to reduce carbon emissions and increased regulatory scrutiny will drive a wave of demand led by France, Germany, Italy and the U.K. Tesla is aiming for its Berlin Gigafactory to begin production in July.

Let's take a closer look at the European market.

In case the last few quarters of profitability haven't hipped you to this, Tesla sells a lot of electric cars. This is true pretty much everywhere that it operates. However, according to a report published Wednesday by InsideEVs, Tesla is no longer the biggest fish in Western Europe.

While other electric vehicle makers have had a relatively slow increase in sales compared to Tesla's big spike and subsequent plateau starting in January of 2019, the slow and steady route seems to be paying off for the Renault Nissan Mitsubishi Alliance and the Volkswagen Group, both of which eclipsed Tesla's sales as of August of 2019.

That trend has continued, with industry analyst Matthias Schmidt stating that Tesla's Western European (this includes the EU plus UK, Iceland, Norway and Switzerland) market share has fallen from 33.8% down to just 13.5% over the last year. That's a massive drop, but why is the Big T losing ground?

Part of it has to do with the fact that Tesla is a single brand going up against multibrand conglomerates. Next, Tesla doesn't really sell super-affordable electric cars; the competition has more entry-level EVs available for people, even though they don't offer anywhere near the range or performance of a Model 3, for example.

Lastly, and this is a big one, many of these competitor companies are likely willing to sell their EVs with a much smaller profit margin to meet corporate emissions targets. They can use the EV sales to shore up the emissions side of things while their diesel and gasoline product sales keep the lights on, so to speak.

On a related note, check out Warren Buffett's explanation of the investors' fallacy that investing in a winning technology translates to investing in a successful company.