When Bell Labs got funky

Leafing through Internet Archive's If magazine collection looking for public domain art I could appropriate (sooner or later I will need a shot of robot-on-robot violence)... 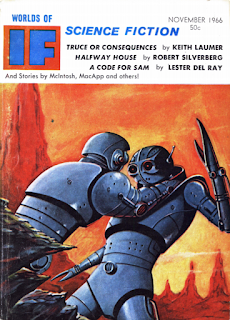 ... I came across an ad that seemed interesting.

[If was the sister publication of Galaxy]

A bit of Googling took me to this from WFMU


"Music From Mathematics" was an album of early electronic music, programmed by the boffins (very likely in authentic period white coats and glasses) at Bell Laboratories way back in the early 1960s, using the then-new IBM 7090 computer and an "electronic to sound transducer". The music on the album, about half of which is included here, is a mixture of strange, other-worldly blips, rushing white noise, tootly reworkings of classical pieces and a marvellous period "singing computer" version of "A Bicycle Made For Two" (already featured on the 365 Days Project, #62, and so not included again). Full marks to Decca Records for releasing the record - remember that in 1962, these alien sounds would have been totally new, and suitably space-age in their sound.

So for your listening pleasure...