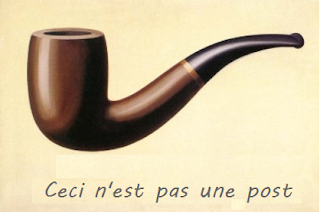 Specifically this is not a post about Gerard Alexander's New York Times op-ed “Jon Stewart, Patron Saint of Liberal Smugness.”  Andrew Gelman just did a post on Alexander's piece over at the Monkey Cage, which is probably more attention than it deserves. For me to write another post, would require a careful rereading of the original op-ed to pick apart the rhetorical flaws and to select the most representative quotes. That's a lot of miles in the middle seat of the clown car (particularly when you aren't being paid for the trip).

So this is not a post. Instead, this is something of an unsolicited postscript to Gelman's post, especially this:

A characteristic feature of polarization seems to be the impression that one’s own side is reasonable and that all the polarizing comes from the other side of the political aisle.
I came across an amusing example of this today, ironically from a political scientist, Gerard Alexander, who, in an op-ed entitled, “Jon Stewart, Patron Saint of Liberal Smugness,” writes:


Many liberals, but not conservatives, believe there is an important asymmetry in American politics. These liberals believe that people on opposite sides of the ideological spectrum are fundamentally different.

This is just too perfect. It’s a beautiful paradox. If Alexander is right, then there is an important asymmetry in American politics, which is the thing that he’s saying conservatives don’t believe! If he’s wrong, then there is no asymmetry, which is what he’s saying conservatives believe in the first place. It’s like something out of Lewis Carroll.


And a bit later:

Also this, from Alexander:


My strongest memory of Mr. Stewart, like that of many other conservatives, is probably going to be his 2010 interview with the Berkeley law professor John Yoo. Mr. Yoo had served in Mr. Bush’s Justice Department and had drafted memos laying out what techniques could and couldn’t be used to interrogate Al Qaeda detainees. Mr. Stewart seemed to go into the interview expecting a menacing Clint Eastwood type, who was fully prepared to zap the genitals of some terrorist if that’s what it took to protect America’s women and children.
Mr. Stewart was caught unaware by the quiet, reasonable Mr. Yoo, who explained that he had been asked to determine what legally constituted torture so the government could safely stay on this side of the line. The issue, in other words, wasn’t whether torture was justified but what constituted it and what didn’t.

First off, let me say that this is a horrible thing to say about Clint Eastwood, who was never involved in this:


On December 1, 2005, Yoo appeared in a debate in Chicago with Doug Cassel, a law professor from the University of Notre Dame. During the debate, Cassel asked Yoo,


‘If the President deems that he’s got to torture somebody, including by crushing the testicles of the person’s child, there is no law that can stop him?’, to which Yoo replied ‘No treaty.’ Cassel followed up with ‘Also no law by Congress — that is what you wrote in the August 2002 memo’, to which Yoo replied ‘I think it depends on why the President thinks he needs to do that.’


A while back we opened up a thread on the distinction between ideological and partisan ("Let's see how many people I can piss off with this one: Fox News is not all that conservative"). This is a particularly telling example, a self identified conservative upset because a liberal media figure made a fundamentally conservative argument that happened to be at odds with the Republican partisan objectives of the moment.

Obviously there is room for disagreement here, but if we take a libertarian perspective (and libertarianism has largely become the most intellectually respected school of conservative thought) there is simply no way to defend the proposition that the government can do anything it chooses and violate any and every personal liberty as long as it is protecting the common good.

You would have to feel you had a pretty good case to call someone the "Patron Saint of Liberal Smugness" in the headline of an NYT op-ed, especially if you have some kind of reputation to protect, but the only substantive example Alexander gives is of Stewart not being all that smug to someone who's not being at all conservative.

The weird thing about this is that Stewart is openly liberal and is often brutally critical of people arguing genuinely conservative positions. I'm not saying that Alexander was right, but he could have at least made a case had he used appropriate examples.The fact that he didn't, and, more pointedly, that he so completely mixed up concepts like ideology and partisanship is another indicator of just how confused the political dialogue has gotten.