When I first started really digging into the education reform movement a few years ago, it quickly became obvious that, with remarkably few exceptions, my educational philosophy (which was heavily influenced the eminent 20th Century mathematician George Pólya) was sharply different from the prevailing ideas of the movement. I  initially assumed this was just me being out of the loop. After all, it's been a long time since I've taken an education class and even back then Pólya's pedagogical work had been around for decades. I thought that those on the other side of the debate either weren't familiar with Pólya's work on teaching or had examined and rejected the ideas.

The truth seems to be more complicated. As I spend more time in the reform world, I keep seeing ideas and techniques that either seemed to be or explicitly were derived from Pólya's How to Solve It. Normally, I would be pleased to see this but almost invariably there's something off about these examples, as if they had lost something important in translation.  Perhaps even worse, the Pólya-derived ideas never really meshed with the other concepts being presented and often directly contradicted them (try reconciling the methods of How to Solve It with deliberate practice).

After a while, I realized part of the problem: virtually all of these lessons were derived from a tiny sliver of the man's writing, not just a single one of his books but from the inside cover of that one book.

"The list" is one of the best and best-known features of How to Solve It. It is also one of the most problematic. On the plus side, it provides in concise form both Pólya's four phases of problem-solving and a useful collection of "questions and suggestions" that instructors may use either as comments while solving a problem for a class or as hints while helping students individually. Pólya's approach relied heavily on Socratic dialogues. These could be teacher/student, teacher/self (as a running commentary when doing a problem for a class) or student/self (because the end goal is an internalized process). This list can be enormously helpful for teachers when first learning these techniques.

On the minus side, for those who didn't go past the inside cover, the list looked like something it very much wasn't: an algorithm, a series of instructions to be followed in a well-defined manner which would reliably lead to the desired outcome. 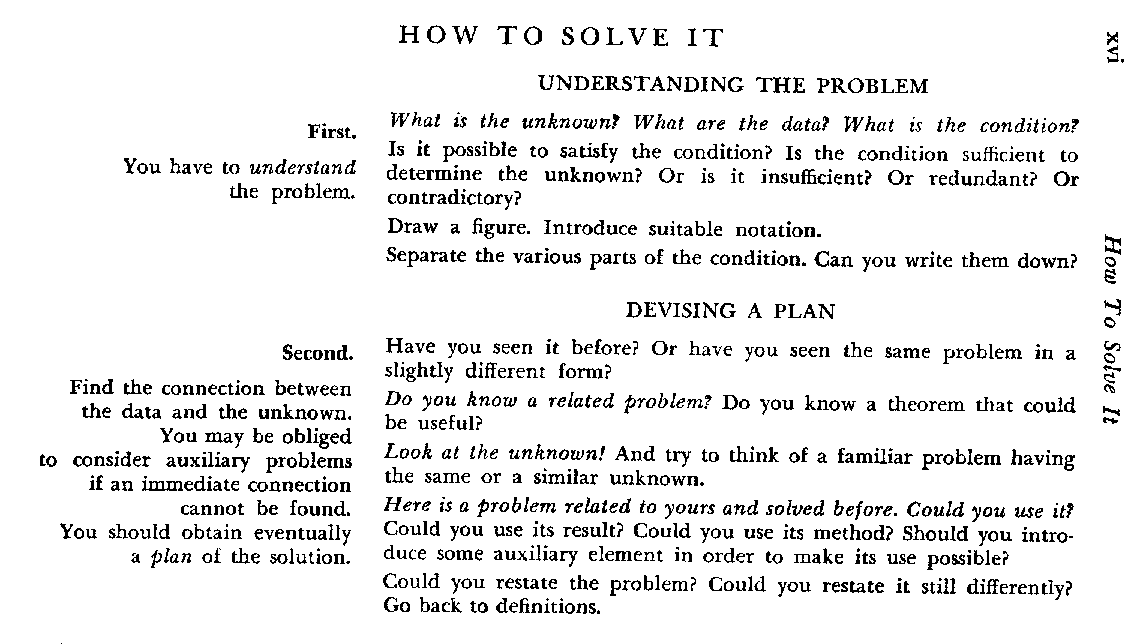 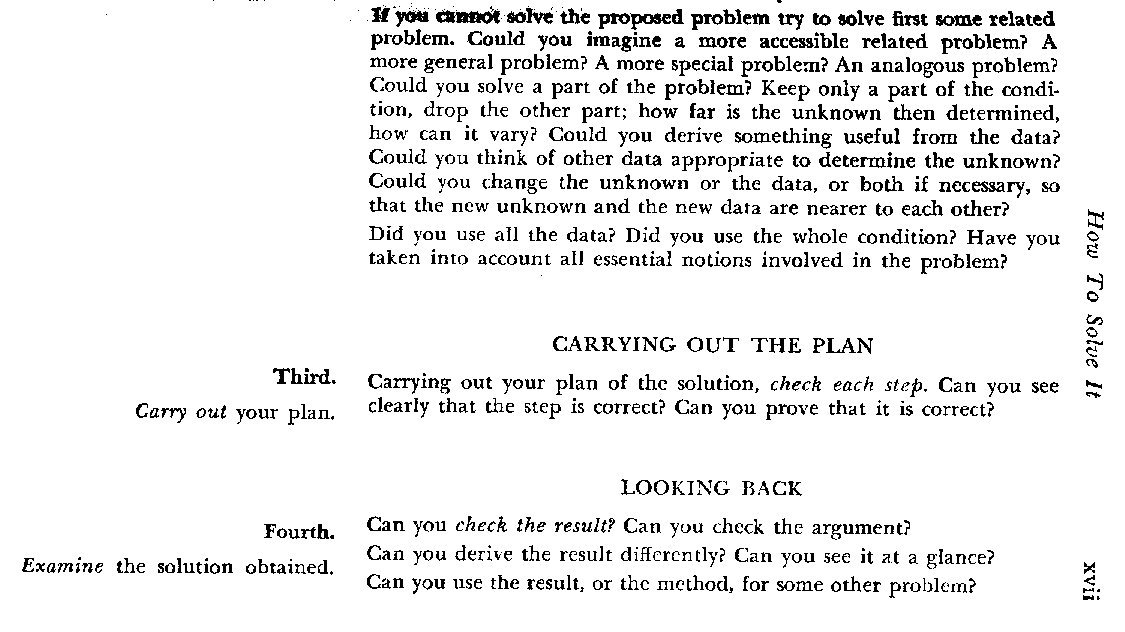 Pólya explained explicitly and repeatedly that these were questions and suggestions that could be helpful if used in situations where they fit well and arose naturally. 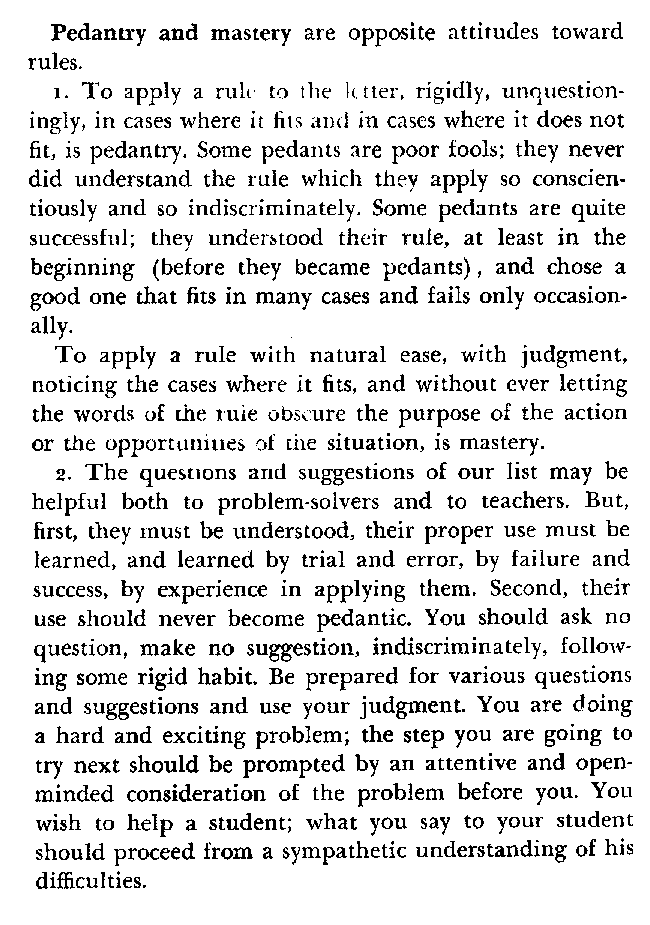 He made these points frequently and emphatically enough that anyone who actually read How to Solve It (and it is neither a long nor difficult read) could hardly miss them..

Instead of providing a step-by-step approach, the primary purpose of these questions was to shift the focus of mathematics instruction less toward what and more toward why. Pólya wanted the steps we showed students to be not only right but reasonable. 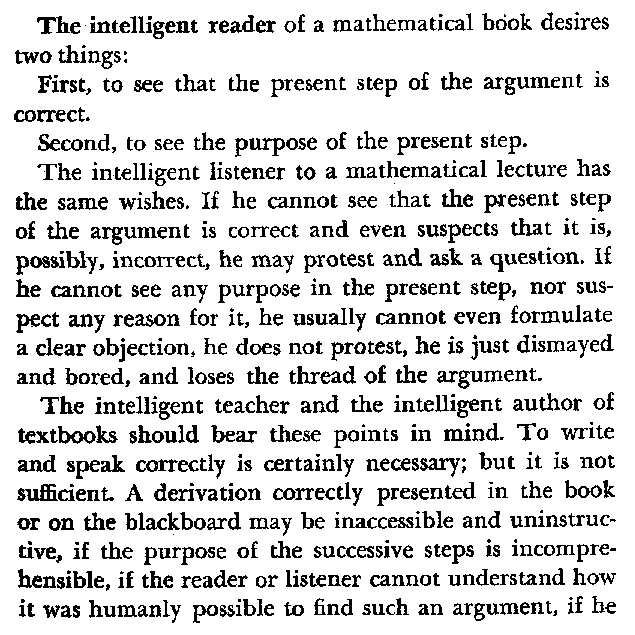 I'll come back to this topic later with some examples of just how completely the reasonable part has been lost in translation.
Posted by Mark at 9:00 AM