In one of those synchronicity moments, shortly after writing this post about how the movie Citizen Kane plays with the persona of William Randolph Hearst, an unrelated news story got me to thinking about editors and publishers give platforms to people whom they would normally refuse to associate with. That got me thinking about how Hearst caught hell for some of those associations (and why this shot had such added significance for audiences back in 1941). 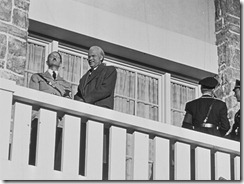 From a Newshour interview with Hearst biographer David Nasaw:

TERENCE SMITH: He had an odd relationship and view of both Adolf Hitler and Mussolini. Tell us about that.

DAVID NASAW: Well, he had at one point working for him... because he had 20 million readers, he had a large number of politicians in the United States and world statesmen who wanted to write for him, who wanted to reach his audience. At one point or another in the 20s and the 30s, Winston Churchill, David Lloyd George, Benito Mussolini and Adolf Hitler all wrote for him. Hitler wrote for him from the time that his Nazi Party became the second-largest party in Germany until Hitler became the leader of the German state, at which point he demanded of Hearst that he be paid as much as Mussolini because he, too, was now a chief of state. Hearst denied him that request. Hearst said to the editor who was corresponding with Hitler, "Hitler doesn't write well enough, he doesn't meet his deadlines, he promises us exclusives he doesn't give us-- we don't need him." And they instead used Goering.