This is my second big Netflix story of the week which makes me a little nervous. I am afraid that these posts often come off as attacks on the company when the intention is to use the company as a jumping off point for discussing the way business journalists cover topics like technology, growth, superstar CEOs, and particularly in this case marketing.

Reporters often seem to have an extraordinarily weak grasp of how advertising and PR work as part of a business model. I say "seem" because there has to be a degree of playing dumb here. The two worlds are simply too closely connected with too much overlap in personnel for either side to be all that naïve and reporters often have a vested interest in being at least a little bit gullible.

What ever the reason, far too many suspect and out-and-out unbelievable narratives find their way into the business pages. One particularly questionable assumption that shows up all the time is that all marketing is meant to increase profitability either through more subscribers or less churn.

I know I've gone over this before so we will just stick with the short version here. A great deal of PR and advertising is intended not primarily to improve the profitability of the company, but to improve its reputation in a way that sustains high stock value and/or improves the professional and social standing of its leadership.

Responsible business journalist need to be alert to these different types of marketing and not simply go along with the version said to them by a company's press spokesman. 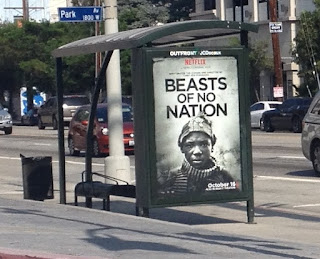 
Beasts of No Nation is a 2015 American war drama film written, shot, and directed by Cary Joji Fukunaga, about a young boy who survives as his country goes through a horrific war. The film, based on the 2005 novel of the same name by Uzodinma Iweala, was shot in Ghana, and stars Idris Elba, Ama K. Abebrese, Abraham Attah, Grace Nortey, David Dontoh, and Opeyemi Fagbohungbe.


Beasts of No Nation is, by almost all accounts, a skillful, serious film featuring Oscar caliber performances by Elba and Attah, but most of the coverage has had less to do with the film's artistic merit and social significance and more to do with the way it was released.


Red Crown Productions was the financier and producer, along with Primary Productions and Parliament of Owls. On May 17, 2014, Participant Media, along with Mammoth Entertainment, came on board to co-finance the film, initially budgeted at $4.3 million but which ultimately cost about $6 million.

Netflix bought the worldwide distribution rights for around $12 million. The film was simultaneously released theatrically and online through its subscription video on demand service on October 16, 2015, with Bleecker Street handling the theatrical release. Considering the online release a violation of the traditional 90-day release window of exclusivity to theatres, AMC Cinemas, Carmike Cinemas, Cinemark, and Regal Entertainment—four of the largest theatre chains in the United States—announced that they would boycott Beasts of No Nation, effectively downgrading it to a limited release at smaller and independent theatres. The film was also theatrically released in the United Kingdom on October 16, 2015, in Curzon Cinemas.

A total tab of 20 to 30 million certainly seems credible, particularly when you add in the inevitable Oscar blitz. From a movie lovers standpoint, it is great that Netflix is pouring money into this kind of project.

From a business standpoint however, there is no getting around the fact that, despite extensive publicity, very few people wanted to see this movie enough to show up in the theaters. Just how few? The minuscule box office (around $80,000) isn't that informative in this instance since the movie had an extremely limited release, only opening in thirty-one theaters. In this case the relevant metric is the theater average. 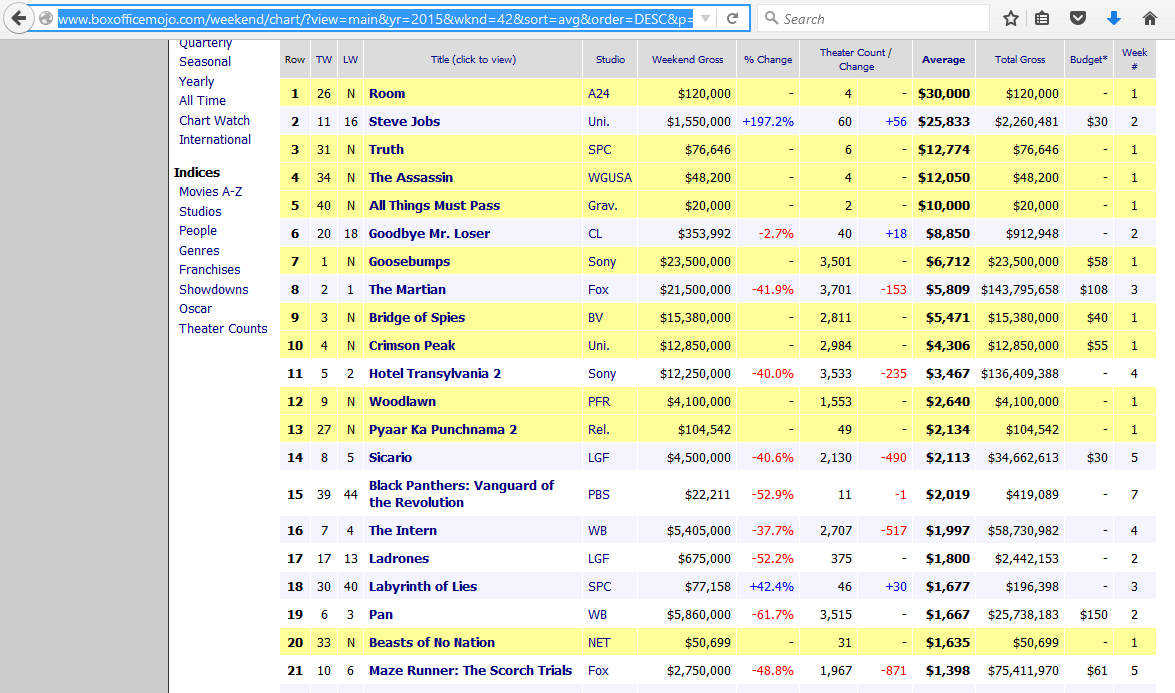 Limited release films with high profiles tend to do quite well by this metric; Beasts' $1,645 average was tiny, even allowing for some of the audience opting for the streaming option. By comparison, the PBS documentary Black Panthers: Vanguard of the Revolution broke  $2,000 in its seventh week.

Calculating brand effects can be tricky, but even taking that into account, it is difficult to see how Netflix expected a grim arthouse picture with little buzz and no bankable talent to come close to justifying a $25 million expenditure in terms of revenue. Ted Sarandos, Netflix’s chief content officer, tried to make the case in terms of artistic merit --“This story had to be told.” -- but that's almost as difficult to believe. The film was, after all, completed before Netflix entered the picture and it's likely that more conventional theater-then-streaming distribution deal would have meant a bigger audience (and cost Netflix perhaps a tenth as much money).

Netflix spent probably an extra twenty million dollars so that they could label a prestige film a "Netflix Original" and possibly get their name associated with a best supporting actor nomination. This is absolutely consistent with a longstanding pattern.

Netflix is a high-flying stock with a paper-thin profit margin and a somewhat shaky business model facing a fiercely competitive market. Under those conditions, aggressive PR is essential to maintaining stock prices. Relative to earnings, you would be hard pressed to find another major player that spends as much on efforts to depict itself as an influential, dynamic company on the verge of great things.

We could go back and forth on the accuracy of that picture and we could argue over where the line is between portraying a company in a positive light (which is management's obligation) and misrepresenting a company to pump up the stock. These are not trivial questions and I honestly don't know where I would come down on them (though I do have stronger opinions about the first than I do about the second).

For journalists, though, the ethics seem fairly clear. They have an obligation to give their readers and viewers an accurate picture. That means making a distinction grassroots and astroturf, between a word-of-mouth groundswell and PR-driven hype. You can't do a story on how everybody's talking about a new business without mentioning the company is paying everyone to talk about it/