Now it is true that some of Brexit was made possible by social media, including Twitter, but that is not the angle that I want to take today. For today, I want to talk about simple solutions to complex problems.

Brexit was very much sold as a way to take back control and still retain benefits. Colloquially known as "cakeism", it created a narrative that you could have all benefits and no costs to the United Kingdom leaving the European Union. Thus the analogy with having your cake and eating it as well. Investment groups have noted that the economic effects of Brexit have tended to be deleterious, with the United Kingdom mostly doing worse in terms of economic growth.

Now the counter-factual is hard and there are other things happening at the same time (for example, a world-wide pandemic has not been good news for growth and perhaps the health care sector in the United Kingdom was especially weak). But it is hard to see how this ended up as good news. Nor do I have any patience for "if only Brexit was done right". If your policy cannot survive the real world challenges of implementation by three successive Prime Ministers, all of whom have enacted it despite huge political costs, then it is not much of a policy. So forgive me if my patience for "Brexit betrayed" is thin -- the policy needs to be robust enough to survive normal politics and not a religious calling which only the truly devout can make work. The United Kingdom is a constitutional monarchy, not a theocracy.

Similarly, with Twitter, it is looking like simple solutions to a complex moderation problem have worked out poorly. Now, I do want to make one caveat. It is possible that Twitter is a project for which Elon Musk is expending his wealth out of a vision of a better social media future rather than a business opportunity. Bill Gates has spent more than the $44 billion Twitter cost on charity, so it isn't impossible that this is the plan and then what I have to say won't make much sense. If Musk has a twenty-five year social media vanity project then it might be worth that much of his wealth to shave 5-10 years off of it. Not sure, but just keep in mind these comments are under the rubric of "create functional business" and not "repurpose company for private ambitions to make the internet better". I have thoughts if it is the later, but they are quite different.

Instead, I want to focus on the way that he was managed knowledge workers. Looking at the timeline we see the following the steps (thanks to Gergely Orosz for keeping track of it):

This is a very atypical way to manage knowledge workers. It creates uncertainty and fear when you want dedication and passion to make a tech company work as well as not setting it up well for trying to hire in the future. Further, it seems to think that the primary business of Twitter is coding and not in monetization of the user base for advertiser revenue (90% of the companies revenue right now). This is why the vanity project option even comes up -- fundamentally changing the business the company is in only makes sense in the context of massive unmet need or a repurposing of the company for a different set of goals.
Further, this all comes at a number of costs. Large layoffs cost you employees that are expensive to replace and this sort of mass layoff policy can create legal consequences: 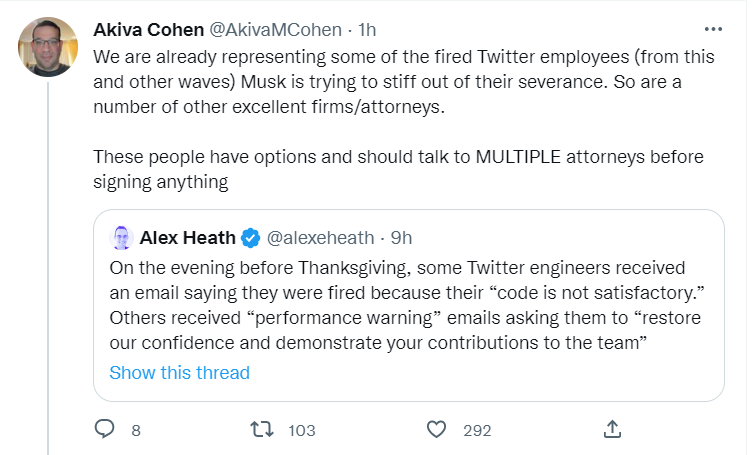 Which are just another layer of business friction that needs to be overcome. Yikes!
Now it might well be that these projects (Brexit and Twitter) will look very different in a few years as the potential of the new arrangements is realized or the projects crash and burn. But the big take-away that I want to have with all of this is that reforming a complex system is hard and it takes a long time to find a new equilibrium. In some cases, the existing system has already drifted into a global maximum of utility and trying to find a new spot is just trading around what declines in utility that you are willing to accept.
Definitely something to consider the next time simple solutions are posed for complex problems.